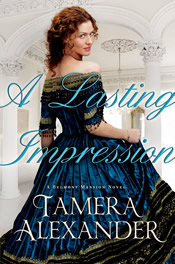 I recently had the opportunity to read A Lasting Impression by Tamera Alexander as part of a LitFuse Book Tour.

I'll confess that this isn't the type of book I'd normally pick up.  In the 'romantic Christian historical fiction' genre, I tend to go for titles that take place in locations I care about or in time periods I'm particularly interested in.

This one (Nashville, right after the Civil War) doesn't fit either category for me.  But I seem to have developed a third category... books written by authors I've enjoyed.  Having read Within My Heart last year, I knew that Tamera crafted a good story filled with interesting characters, and that she has a good grasp of this time period.

So I signed up.


A fake. A forger. More than anything, Claire Laurent longs for the chance to live an authentic life, to become the woman she wants to be. And she'll be given that choice. But will it come at too costly a price?

Claire Laurent's greatest aspiration is to paint something that will bring her acclaim. Yet her father insists she work as a copyist. A forger. When she's forced to flee from New Orleans to Nashville only a year after the War Between the States has ended, her path collides with attorney Sutton Monroe. She considers him a godsend for not turning her in to the authorities. But after he later refuses to come to her aid, Claire fears she's sorely misjudged the man. Finding herself among the elite of Nashville's society, Claire believes her dream to create a lasting impression in the world of art is within reach--but only if her fraudulent past remains hidden.

The Federal Army has destroyed Sutton's home and confiscated his land, and threatens to destroy his family's honor. His determination to reclaim what belongs to him and to right a grievous wrong reveals a truth that may cost him more than he ever imagined--as well as the woman he loves. Set at Nashville's historic Belmont Mansion, a stunning antebellum manor built by Mrs. Adelicia Acklen, A Lasting Impression is a sweeping love story about a nation mending after war, the redemption of those wounded, and the courage of a man and woman to see themselves--and each other--for who they really are.

I really enjoyed this book.  It took me some time to get into it, but on Sunday I had some free time -- and I ended up reading for a few hours.  I was swept into the story and I found the characters felt really real, even though the events taking place are so far removed from my own life.

There is a solid Christian message, but not a preachy bonk-you-over-the-head message.  The more Christian fiction I read, the more I appreciate that.  I particularly loved reading the "Dear Reader" pages at the end.

Lasting impressions.  What kind of impressions am I leaving?  That was a thought I had as I was trying to do things like come up with a blog title.  My blog is based on the punchline of a joke we heard hundreds of times when Connor was little.  But not only that, it reminds me of the footprints I am leaving, or the impressions I leave... I want my footprints, my impressions, to lead not to ME, but to Him...

While Tamera and her book,  A Lasting Impression, are traveling across the country virtually
(with a few international stops as well!), she will be hosting a Kindle Fire Giveaway (11/4 - 11/15) and preparing for a lavish Southern-Style Facebook Party (11/15) (dripping with hospitality, of course). She will be giving away Southern Food Baskets, books, and an array of other fabulous freebies! Don't miss a minute of the fun. Swoon!

Read what the reviewers are saying here.

One grand prize winner will receive:
Enter today by clicking one of the icons below. But hurry, the giveaway ends at noon on November 15th. Winner will be announced at A Lasting Impression Facebook Party on the 15th. Tamera will be wrapping up the A Lasting Impression celebration with an author chat and giving away Southern Food Baskets (Loveless Cafe Food Baskets, books, Amazon & Starbucks gift certificates, and copies of Christy Jordan's Southern Plate cookbook), six gift certificates to Starbucks and Amazon.com, and copies of A Lasting Impression! So grab your copy of A Lasting Impression (it's okay if you don't have one yet- you might win one!) and join Tamera on the evening of November 15th for an author chat, a trivia contest (How much do you know about the 1860's?) and lots of Southern-inspired giveaways (complete listing here).

Don't miss a moment of the fun. RSVP today and tell your friends via FACEBOOK or TWITTER. Hope to see you on the 15th!


Disclaimer:  I received this book through LitFuse.  No other compensation was received.  All opinions expressed in this review are my own.
Posted by Debra at 11/09/2011 12:08:00 PM