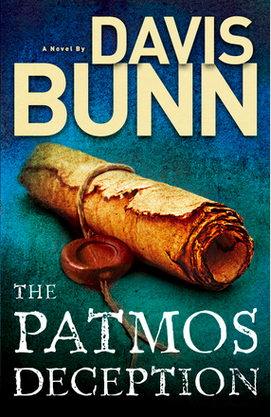 So a book called The Patmos Deception, that lists a "forensic archaeologist" among its main characters?  Oh, yeah.  I want to review that one.

I've read other titles by Davis Bunn, and I have enjoyed them.  His work is fairly action based, though there is a fair amount of discussion.  What it doesn't include is a whole lot of emotional fluff.

I find that refreshing.


An Ancient Island Holds an Ancient Secret . . .
Nick Hennessy, a young Texas journalist yearning for his big break, finds himself in Europe--his assignment, to investigate the alarming disappearance of invaluable Grecian antiquities. Nick has the credentials--and cover ID--to unearth the truth. And he knows just the researcher to help him...

Carey Mathers, fresh from her studies in forensic archeology, has accepted a job with the prestigious Athens Institute for Antiquities--a dream come true, really, particularly when the Greek isle of Patmos, where the Apostle John received his vision of the Apocalypse, was a particular focus of her research.

Dimitri Rubinos, for whom the Greek islands represent his life, holds on by his fingernails to the family charter boat business. But his country's economic chaos isn't the only thing that has turned his world on its head...

There are a number of twists and turns in this story that definitely kept me guessing.  I particularly loved getting to know two Greek families -- one family who "adopts" Carey when she arrives at the Athens Institute for Antiquities, and Dimitri's family in Patmos.

I also loved some of the history portions, where someone is explaining life in the early church, or John's time in Patmos, or other history of the various locations.

The book is set up for a sequel, and I will be checking that out!

Disclosure:  Bethany House provided me with a complimentary copy of this book for review purposes.  No other compensation was received, and all opinions are my own.
Posted by Debra at 1/08/2015 05:33:00 PM