Wrapping up the week

I'm too scattered for a real post, so some things that have happened here lately, with links to people more coherent than I am.  And maybe even a picture or two.

We're reviewing a really great book by a really fun person -- Mystery of the Missing Mountain by Kim Jones.  You have to go check out the Mystery Rangers Fun Zone, and look for the kid who has "flipped" over the book...

I'm hoping to get the review done this week, but it is slow going.  Because William is insisting on doing every single hands-on activity.  And, to be honest, because the code-breaking activities are fairly challenging for him.  At least for this many.  I, on the other hand, am pretty happy that he wants to get to the volcano building and everything else, so he is forcing himself to work through the hard-for-him stuff.  Though I got the author's permission to let him skip a couple of the codes if he gets too burned out.<grin>

Of course, it doesn't help that we started working through Greek Alphabet Code Cracker either.  Poor kid.

My itty-bitty Tiger den is so cute.  We're not going to make it to earning the Tiger badge by Blue & Gold (next weekend) because we are short one activity.  We're currently voting -- everyone took forever to get back to us, so we ended up with three parents arranging for three separate opportunities -- do we go to see the newspaper down at Fort Carson?  Or do a tv station tour?  Or tour the local Christian radio station?  Decisions, decisions, decisions...  Waiting to hear if any of the proposed days do NOT work, and then we'll make a decision. 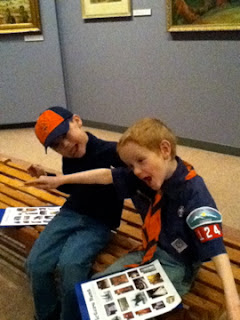 But we did go to the Pioneer Museum yesterday.  I have lived here for over sixteen years, this museum is FREE, and I have never been to it.  Right now, they have a WWII POW exhibit going, in addition to all the cool stuff they usually have.  I would have loved to have spent more time in that.  Two six year old boys, though, well -- they had other ideas (only half the den was able to attend).

This picture is of Richard and D goofing off.  None of the serious pictures really worked.  In their laps are the scavenger hunt sheets -- we went through the museum trying to find the items listed.  We only really needed help with one that we just couldn't locate.  The kids were given great bookmarks as prizes -- one says "I love history" and the other had something to do with history as well.

Thomas went along too, but managed to get out of this photo...

I mentioned the other day that I've been trying to deal with my winter blues... a friend wrote an excellent post today that pretty much covers what I've been considering.  I think this post is a great read, even if you aren't feeling down.  At this time of year, a lot of people around you are... 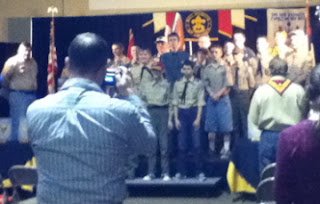 Oh, in addition to going to the museum yesterday morning, my two boy scouts were participating in an Eagle Court of Honor.  This mom is who I want to be when I grow up, I'm telling you.  But I will never, ever have the attention to detail required to pull off such coordinated events.  Ever.

Anyway, this is the second of their boys to make Eagle, and it was so much fun to be there.  Even with a pipe bursting before the ceremony -- so mostly dads got that cleaned up, water shut off, bathrooms blocked off... so it didn't go without a hitch, but close.  William got through his reading.  I was glad of that.  I thought he'd freeze up.

The picture is pretty lousy though -- but this was at the end where they recognized all the scouts in the troop and how a young man doesn't make Eagle without a strong troop behind him.

One huge upside to this is that Connor talked with a couple of the assistant scoutmasters about his road to Eagle... and since this mom is sick of him having five Eagle-required merit badges partially completed with him putting NO effort into any of them at the moment, that bit of news was wonderful.  I know he could knock out two of them if he spent about an hour and a half getting things together and just *met* with his merit badge counselor.  The other three would take a bit more effort.

Oh, and then I checked my emails at the gas station -- and had an email from Kinderbach.  Apparently, I get to review that again this year, with a three month subscription.  We loved it last year and I was certainly hoping...

It sounds like a packed week for you. The Case of the Missing Mountain sounds like a fun one to review. And, I have a boy happy to be on the Kinderbach review list again :o)