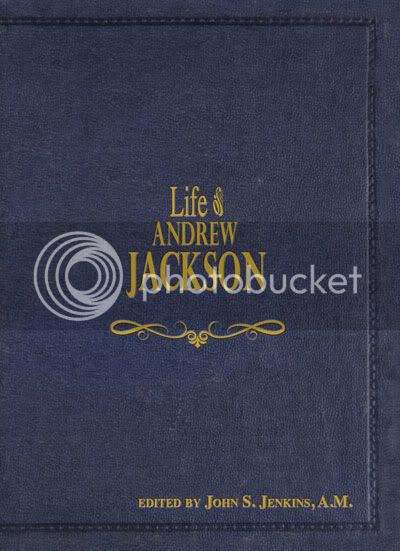 Life of Andrew Jackson edited by John Jenkins is another in a "new" series of books put out by Attic Books.  This "Life of" series currently consists of five titles, and I own all but Life of Luther.  I reviewed Life of John Knox awhile back, and will be reviewing Life of John Newton sometime soon.

This series is reprinting old biographies of some pretty fascinating people.  I remarked in my review of John Knox that the language was challenging and you really needed to be paying attention.  With that in mind, I was really leery of Jackson, as this book is almost three times as long as Knox.

I didn't need to worry.  The language, while sometimes sounding a bit outdated, is easy to understand.  Some of the quotes take a second reading, but not many.

As for the narrative, well, I was eagerly turning pages.  I knew a bit about Andrew Jackson.  A bit.  You know, he was president number 7, he was from "the west" and he was a big name at the Battle of New Orleans.  Maybe I knew a bit more...  but not a whole lot.

This book started me off saying, "I didn't know that" from the very start.  Like the fact that Jackson fought in the Revolutionary War -- and was a POW besides.  He lost his entire family to that war (his father had died before Jackson was born).

I was fascinated by the chapters on the War of 1812 -- a war I really know very little about.  Maybe my boys are rubbing off on me, but the discussion of his battle strategies were well told and really, that was the point where I did not want to put the book down.

This is a title I am going to have Connor read while studying American history in the coming year.


Disclaimer:   I received this book for free from New Leaf Publishing Group.  No other compensation was received.  The fact that I received a complimentary product does not guarantee a favorable review.
Posted by Debra at 7/25/2011 07:38:00 AM