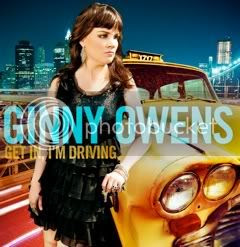 I've had the chance over the past week to listen to this CD, and it has been fun.  Energetic, upbeat... and a nice change of pace.

Reviewing music isn't my forte, so I'm just going to tell you a bit about it, and then give you the chance to win a copy for yourself.

A three-time Dove Award winner, including the Gospel Music Association’s 2000 New Artist of the Year recipient, and multiple ASCAP Award winner, Ginny Owens has sold nearly one million albums. A top performer on the Christian radio charts with hits like “If You Want Me To,” “Free” and “I Wanna Be Moved,” among others, Owens’ music has impacted mainstream audiences at Lilith Fair, the Sundance Film Festival and the White House. Her music has received widespread film and television placement, including songs on the popular WB series’ “Roswell” and “Felicity.” Owens was featured on national television, including NBC’s “Today” and CNN, for her contribution to help rebuild New Orleans following Hurricane Katrina.

Born and raised in Jackson, Miss., Owens was discovering melodies on the piano almost before she could complete a sentence. Songs began to emerge from her fingers as the vision began to leave her eyes and by the age of three.  A degenerative eye condition left Owens completely blind.  Despite her physical challenge, Owens pursued a music career.  Songs provide a window into a world Owens can’t see and an outlet for her to express her thoughts and dreams. Owens’ unique musical style and inspirational lyrics continue to appeal to Christian and mainstream audiences alike.

In 2005 Owens launched The Fingerprint Initiative, a hands-on, non-profit organization designed to “bring hope to the world, one project and one touch at a time.” The organization has partnered with and raised money for groups such as Compassion International, International Justice Mission and Habitat for Humanity.

I love the organizations she is supporting!

To enter, just leave a comment telling me who you think would most enjoy this CD if you win it.

Want some additional chances to win?  Leave a comment for each that you do!
This giveaway will end next Wednesday night, Sept. 21, at midnight.  I will use random.org to draw a winner.  If I am unable to obtain the shipping information for the winner after a reasonable attempt, I reserve the right to draw another winner.


Disclosure of Material Connection: I received one or more of the products or services mentioned above for free in the hope that I would mention it on my blog. Regardless, I only recommend products or services I use personally and believe will be good for my readers. I am disclosing this in accordance with the Federal Trade Commission's 16 CFR, Part 255: "Guides Concerning the Use of Endorsements and Testimonials in Advertising."

I'm not sure if Addison or I would enjoy the CD most. I might listen to it more b/c I'll put it on when I go run.

I liked Ginny Owens on FB.

I entered the Theo giveaway, too. Thank you!

I believe my daughter and I would both enjoy this CD.

I enter the Theo giveaway :)

I shared this giveaway on FB :)

I would LOVE this CD! I heard Ginny in concert about 6 years ago and have enjoyed her music ever since!
wilburnnewsome atyahoodotcom

I think I would enjoy this cd most, cribcouture@yahoo.com

posted on her fb wall that you sent me, jessie taylor goodwin, cribcouture@yahoo.com

I think my mom would really enjoy the CD. (jessicapeeling@yahoo.com)

Following you on Networked Blogs (jessicapeeling@yahoo.com)

I know my brother would enjoy the cd he loves music.
holli.moore{at}comcast.net

I think I would enjoy this tremendously! (I also think my daughter would take it for herself!)

I was having trouble with the comments earlier, so not sure if this one already showed up....I 've always liked Ginny's music, so I would be the person in my household to enjoy it most.

I told Ginny(On FB) that you sent me!
tawnyamarie at gmail dot com.

I follow on networked blogs.
tawnyamarie at gmail dot com.

I would enjoy this cd
pjames330 at aol dot com

My wife Mandy would love it!
submitaforward @ yahoo.com

I love music, and would love a chance to listen to it with my children. my goal is to raise them with all sorts of music

I think I would like this best, but maybe my daughter would...

Posted on Ginny Owens FB that you sent me