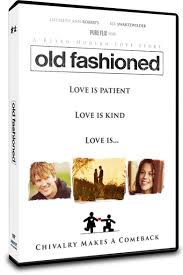 I planned for a family movie night to watch Old Fashioned over the past week.  But life has thrown one thing after another after another and that just hasn't happened.

So we are watching it as a family today, instead.  Grandma, three teen boys, two tweens.  And me.

A romantic-drama, OLD FASHIONED centers on Clay Walsh, a former frat boy who gives up his reckless carousing and now runs an antique shop in a small Midwestern college town. There, he has become notorious for his lofty and outdated theories on love and romance as well as for his devout belief in God. When Amber Hewson, a free-spirited young woman with a restless soul, drifts into the area and rents the apartment above his shop, she finds herself surprisingly drawn to his strong faith and noble ideas, which are new and intriguing to her. And Clay, though he tries to fight and deny it, simply cannot resist being attracted to her spontaneous and passionate embrace of life. Ultimately, Clay must step out from behind his relational theories and Amber must overcome her own fears and deep wounds as the two of them, together, attempt the impossible: an "old-fashioned" and God-honoring courtship in contemporary America.


Everyone enjoyed this, and the hands-down favorite character was Clay's aunt.  She was a stitch.

Clay and Amber were both very likable, and I was a bit surprised at the depth developed in both of them.  They both start off fairly flat and one-dimensional, a bit stereotypical.  They don't know each other at all, but find each other to be interesting.  As they get to know each other better, we get to know them as well.

That's when we start seeing that Clay has flaws, and Amber has some past hurts that have definitely left some scars.

This is rated PG13, and there are some topics that may not be appropriate for younger kids.  You don't actually view much, but one friend has been living with his girlfriend for quite some time, a stripper is hired for a bachelor party, quite a few one-night stands are suggested or implied.

It makes for some great conversations with teens, but you might want to watch it without younger kids and judge for yourself if you think it is appropriate for them.

Watch this space, as I'll be giving away some Old Fashioned stuff later this month.


"Disclosure (in accordance with the FTC’s 16 CFR, Part 255: “Guides Concerning the Use of Endorsements and Testimonials in Advertising”): I did receive a sample of the product in exchange for this review and post.