Anchor in the Storm {a Litfuse Blog Tour review} 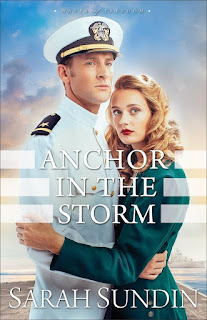 When I had the chance to read Anchor in the Storm, the second book in the Waves of Freedom series, I didn't have to think about it at all.  I reviewed Through Waters Deep, the first book in the series, which I loved.  And I have loved every book by Sarah Sundin.  I knew I'd love this one too.

One of the things I enjoy about Sundin's work is how well-researched everything is.  Related to that, there always seems to be some little thing that isn't widely known, such as the deep divide in the United States about joining in World War II prior to Pearl Harbour, that she highlights in her books.

In Anchor in the Storm, that issue is battle fatigue.  Today, we know it at PTSD, or post-traumatic stress disorder.

We've been studying WWII in school here lately, and just today watched a re-enactment of Patton chewing out a soldier for being a coward.  That was the usual diagnosis at the time.  Buck up, do your job, are you a man or aren't you?

The Patton incident isn't addressed in this book, but the attitude is certainly present.

Sundin does such a terrific job of making these men who are suffering "with their nerves" into real people you care about.  Well, some of them anyway.  Some of the men dealing with PTSD are not very sympathetic characters.  Probably a lot like real life.

In a time of sacrifice, what price can one put on true love? Pharmacist Lillian Avery and Ensign Archer Vandenberg are about to find out in Sarah Sundin's new book, Anchor in the Storm. During the darkest days of the war, Arch's destroyer hunts German U-boats in vain as the submarines sink dozens of merchant ships along the East Coast. Still shaken by battles at sea, Arch notices his men also struggle with their nerves—and with drowsiness. Could there be a link to the large prescriptions Lillian has been filling? As the danger rises on both land and sea, the two must work together to answer that question. But can Arch ever earn Lillian's trust and affection?

Celebrate the release of Sarah's Anchor in the Storm by entering to win her All Hands on Deck Prize Pack!

Enter today by clicking the icon below. But hurry! The giveaway ends on June 8th. The winner will be announced June 9th on Sarah's blog.

You can see what others had to say about the book at the Litfuse Blog Tour page!


Disclaimer:  I received this book through LitFuse Blog Tour.  No other compensation was received.  All opinions expressed in this review are my own.
Posted by Debra at 6/02/2016 08:47:00 PM

Thank you for the lovely review! I'm so glad you enjoyed Arch & Lillian's story. And I'm super-glad you're studying WWII! The Patton incidents were particularly stunning. I actually included one of the slapping incidents (there were two) in my novel On Distant Shores.