We've had the opportunity lately to start working through a high school course available from Master Books.  Comparative Religions: Practical Apologetics for the Real World is a one-year class for 11th and 12th graders. 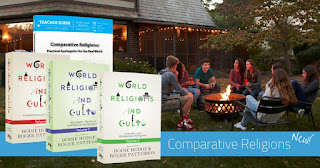 I love adding some of these Master Books courses into our lives.  The Teacher Guide lays out a 36 week plan to work through the three volumes of World Religions and Cults, with material scheduled for five days a week.

The Teacher Guide includes worksheets that you can reproduce for your family, along with quizzes and tests.

The meat of this course is, of course, the three books by Bodie Hodge and Roger Patterson:  World Religions and Cults Volumes 1, 2 and 3. 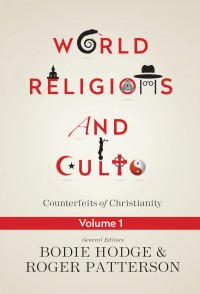 We are still in World Religions and Cults: Counterfeits of Christianity, as the course has you starting Volume 2 in week 11.  We aren't there yet.

Volume 1 is good.  The first third of the book talks about why this topic is important, and it introduces Christianity.  There are chapters about the Catholic and Orthdox churches.  I did appreciate those chapters, though I did feel I needed to detour a bit and we dug into some additional information for both.

The rest of the book gets into most of the religions you would think about for a comparative religions course:  Islam and Judaism in particular.  This volume covers Jehovah's Witnesses and Mormonism.  Those all have fairly lengthy chapters, and these four are roughly 1/4 of the book.  The final portion  tends to be shorter chapters on other things I'm at least somewhat familiar with, though the kids weren't necessarily:  Baha'i, Deism, Satanism, Freemasonry, Zoroastrianism, and Moonies.  The only world religion covered that I really didn't know anything about was the Worldwide Church of the Creator.  We aren't quite that far yet (week 9!)

I'm using this with my recent graduate, and both high school students.  Richard is too young for this (age 14) as he's only a 9th grader.  I would not use this with just him.  But tagging along has worked .

I've been reading the e-book aloud, and we get into some pretty serious discussions from that.  We talk through the worksheets as well, which have the kids summarizing the beliefs of the various religions in the categories of what they believe about God, sin, salvation, creation, etc.  Very handy to have.

We have covered a lot of this information before, though, so getting past the first half or so of this volume was good.  I'm really looking forward to moving on though. 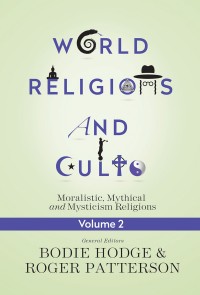 World Religions and Cults: Moralistic, Mythical and Mysticism Religions is the next one up.  As implied by the title, here we will deal with the Eastern Mysticism religions, like Hinduism, Jainism, and such.  We also have chapters on ancient Egyptian beliefs and various mythologies.  This book also hits on areas like paganism, Buddhism, and so much more.  There are around twenty religions covered in this book, which is a bit overwhelming.  Most chapters are short.

I read the chapter on Greek mythology, and found that to be fascinating.  In addition to the material I expected, like a general outline of the various gods, and a discussion of why understanding this is important in understanding our past, there was also a discussion about how today's culture scoffs at this mythology as we are so far beyond that kind of primitive belief.  But it isn't so much that the mythology was about Zeus or Poseidon, but that they were worshiping the force behind those gods.  The text asks if we can really say we've moved beyond the worship of wine, or the worship of reason.  Ouch.  Clearly humanity still worships sex, we still worship youth.  Are we really that different?

Something to ponder.  And I really look forward to discussing this chapter with my high schoolers. 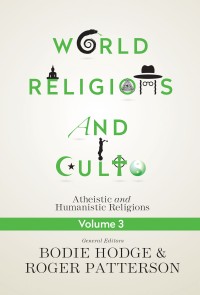 World Religions and Cults: Atheistic and Humanistic Religions is the third volume.  Here we get back to fewer total religious systems and slightly longer chapters.  Obviously, this covers atheism and agnosticism, but it also talks about Nazism, communism, naturalism, postmodernism, and a few more.  This book has quite a few appendices (eight of them).  I think this is going to be incredibly valuable.


What I love is that although there are many, many authors of the various chapters in the book, the tone stays fairly consistent.  And the biggest thing is that it doesn't get overly technical.  Most of the book(s) is fairly conversational and easy to follow.

We are learning from this course, and I definitely appreciate it!

Disclaimer:   I received these ebooks for free from Master Books.  No other compensation was received.  The fact that I received complimentary products does not guarantee a favorable review.
Posted by Debra at 8/31/2018 10:00:00 PM

My son loves the look of this! I may have to invest in it this year being it is his last year!