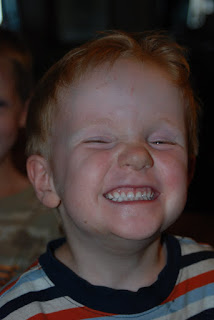 I'm giving you a huge hint as to the punchline here at the beginning of the story, but a "standing joke" in the family is for dh (usually) to be talking to the kids about something, and they end up with that deer in the headlights look where they clearly have no clue what he is talking about. And he looks at me, and does his best Tom Hanks voice, and (from Sleepless in Seattle) says, "I don't even want to think about what they're not teaching you (him/them) in school!" (okay, that's a paraphrase... he knows it word for word, but I don't memorize every movie line I've ever heard. I'm close though. He does change the pronoun around.) This usually is in relation to something where dh isn't totally serious, but kinda sorta... like a discussion about the name of some era in Japanese history (that I didn't know, but dh apparently considers to be basic cultural literacy...)

So, my five year old goes over to dh a couple nights ago. He didn't get his attention, he just started reciting Psalm 91 (core 5 Bible memory verse)... I told him to make sure he got Daddy's attention if he wants him to hear it... which did get his attention. So Richard started over at Psalm 91:1 (punctuation will be wrong, trying to follow what he sounded like, and the links pull up ESV, which is not the version we memorized so the wording is slightly different):

He who dwells in the shelter, of the Most High.

Will abide in the shadow of the Almighty.

I will say to the LORD, "My refuge, and my fortress.

For it is He who delivers you. From the snare of the trapper.

And from the deadly pestilence.

He will cover you with His pinions.

Pinions, Daddy. That's like the flight feathers on his wings. Can I continue, please?

And, and, umm, with his pinions

and under His wings you may seek. Re-fuge!

His faithfulness is a shield and bulwark.

Or of the arrow that flies by day.

Of the pestilence that stalks in darkness.

A thousand may fall at your side.

And ten thousand at your right hand.

But it shall not approach you.

You will only look on with your eyes.

And see. The rec... compense. Of the wicked.

Even the Most High your dwell. ing. place.

No. Evil. Will. Befall you.

Or (should be nor) will any plague. Come near. Your tent.

For he will give. His angels. Charge concerning you.

To guard you in allllllllll your ways.

They will bear you up. In their hands.

Lest you strike your foot against a stoooooooone.

And Dale looked at him, looked at me, applauded, told him great job, gave him a big hug, looked back at me over his head, and said:

"I do want to think about what they are teaching him in school."

And I'm not even teaching him this. I'm teaching his brothers. Apparently, he's picking a fair amount up.