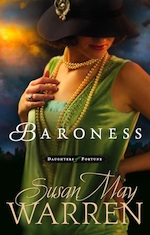 It is time for me to review another book by my favorite author, Susan May Warren.  Baroness, the second title in her Daughters of Fortune series, is her latest "keep Debra up until the wee hours of the morning" title.


Expected to marry well and to take the reins of the family empire, they have their lives planned out for them. But following their dreams -- from avant garde France, to Broadway, to the skies in the world of barnstormers and wing-walkers -- will take all their courage. And if they find love, will they choose freedom or happily ever after?

Just like everything I have read by Susan May Warren, I loved this book.  Much like the first in this series, however, at times I found it really hard to actually relate to the main characters.  What is fascinating, though, is how on one page I'll be rolling my eyes at one of these two women, and two pages later I'm completely empathizing with her.  Basically, like she always does, Warren has created fascinating, multi-faceted characters.

The publisher's blurb quoted above talks about all the amazing locations I visited in this story.  The best locations for me, though, were the little podunk towns all over the upper Midwest.

I found myself totally loving the story of Lilly.  At the conclusion of Heiress, she was plucked from her life on a Montana ranch to be part of the family empire in New York.  She dreams of returning to Montana, and she is the one who spends time in the "world of barnstormers and wing-walkers" during this tale.

Rosie, on the other hand, dreams of life as a starlet. Forever obsessing about clothes and makeup, I had a hard time relating to her.


What I love the most about reading Susan May Warren is that her stories don't tend to end up all wrapped up and completely happily ever after.  People make mistakes, and those mistakes have consequences.  The characters don't finally rediscover their faith and have that make everything all better.  Lest this sound too negative, though, it isn't that the characters live un-happily ever after either!  It's just not a total fairy-tale ending.

Find out what other reviewers are saying here!

Disclaimer:  I received this book through LitFuse Blog Tour.  No other compensation was received.  All opinions expressed in this review are my own.
Posted by Debra at 4/19/2012 01:41:00 PM

I also reviewed this book and really enjoyed it. Thanks for your thoughts and the review. Have a great week! :O)