We've had the opportunity to review a number of See the Light products in the past, and my kids have really enjoyed them.  You can check out what we thought of the Art Class, and of The Crossmaker.


When See the Light popped up as a possibility with the Crew, my family was excited.  Especially Thomas.  We ended up reviewing an item from the new Art Projects series -- Poppy Collage: In the Style of Georgia O'Keefe.

This Art Projects series is intended to be Year Two of the See the Light materials.  You would use the Art Class series in the first year, to learn "the fundamentals" and then follow that up with this amazing series, where each video focuses on a particular artist, and either their general style or on a specific work of theirs.  By spending a month on that style, you get the chance to really pursue it. 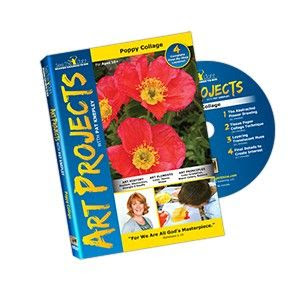 Poppy Collage is #5 in the Art Projects series, however this series seems to be perfectly suited to picking and choosing, as you don't have to have completed #4 (Pointillism Fruit) before doing #5.

Each DVD consists of a brief introductory video, where Pat Knepley gives you a glimpse of what is coming up and talks about the supplies needed; followed by four video lessons.  The idea is to watch one lesson a week, work on that portion over the week, and move on.  Doing it this way, one video will serve as a month of art lessons.

We didn't quite do that, but I also didn't know we'd have to be writing a review.  We took a pretty focused week, and Thomas would watch a video lesson each day, working on the technique/step for  couple of hours that day and maybe into the next morning.  What he has decided he would like to do with other videos in this series, though, is to do it more like:
So, let's show you a bit of what Thomas did in this particular video.  First off, while Thomas loves art, he likes to draw.  All of this mucking around with tissue paper stuff is not something he particularly enjoys.  So one thing I love about this series is that it stretches him into trying other media for his art.

Anyway, in lesson 1, along with some great background information on Georgia O'Keefe and her various paintings showing nature (especially flowers) very, VERY close-up, the student is directed to study a 4-6 petal flower and sketch it.  Something like: 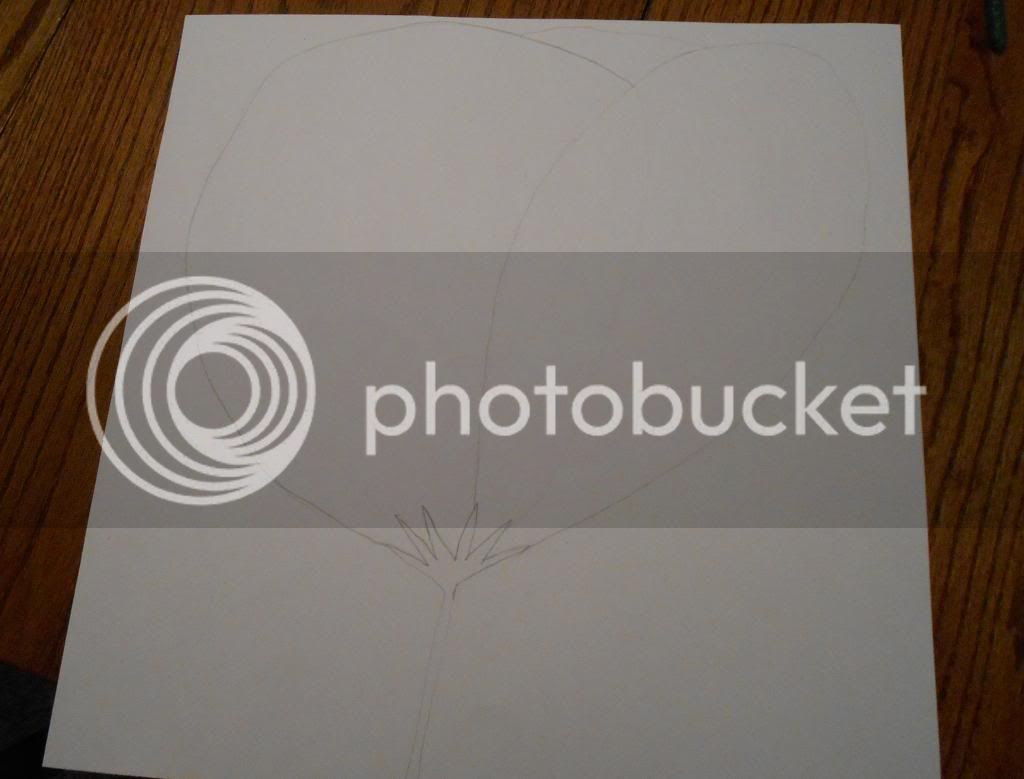 In lesson 2, they learn about the technique of tissue paper collage, along with more information about Georgia O'Keefe.  In lesson 3, they talk about translucence, and focus on continuing to add tissue paper to the collage. 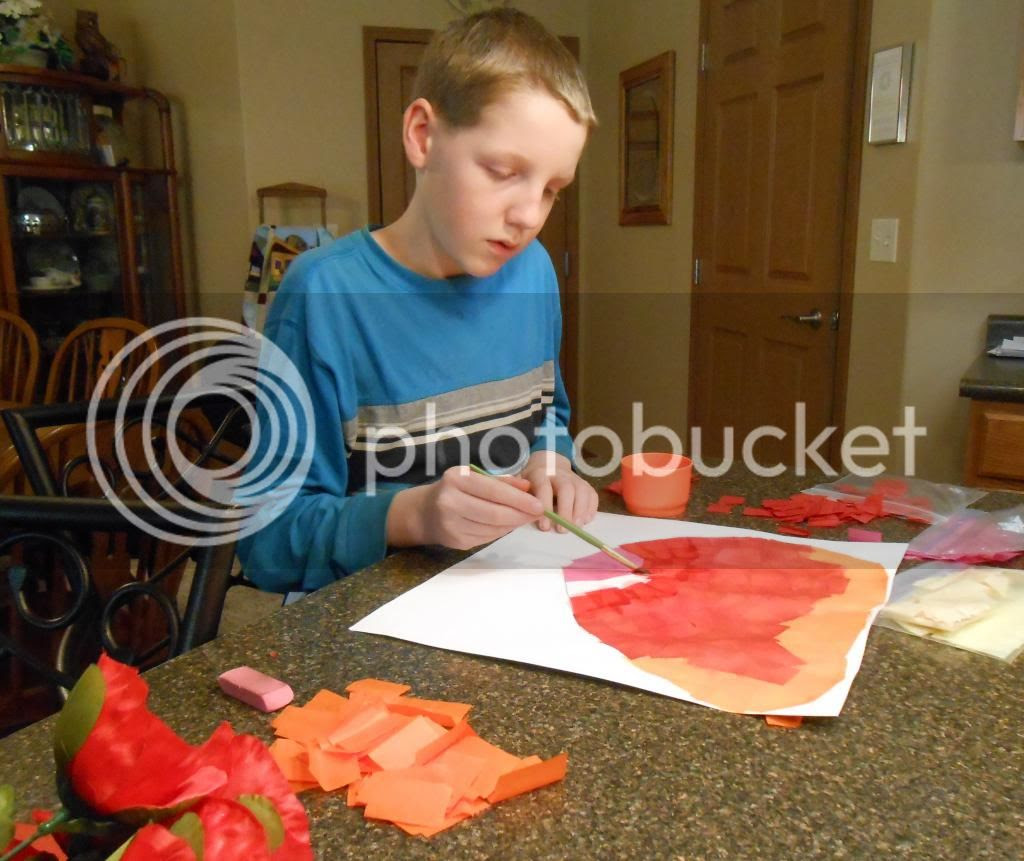 In the final lesson, more detail is added to make the work more finished-looking. 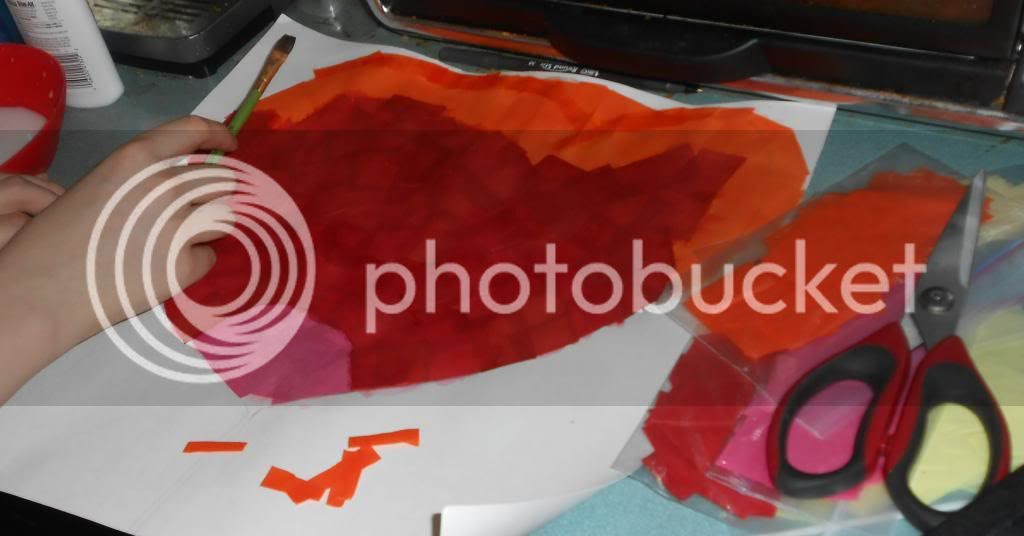 And here he is with his first finished project: 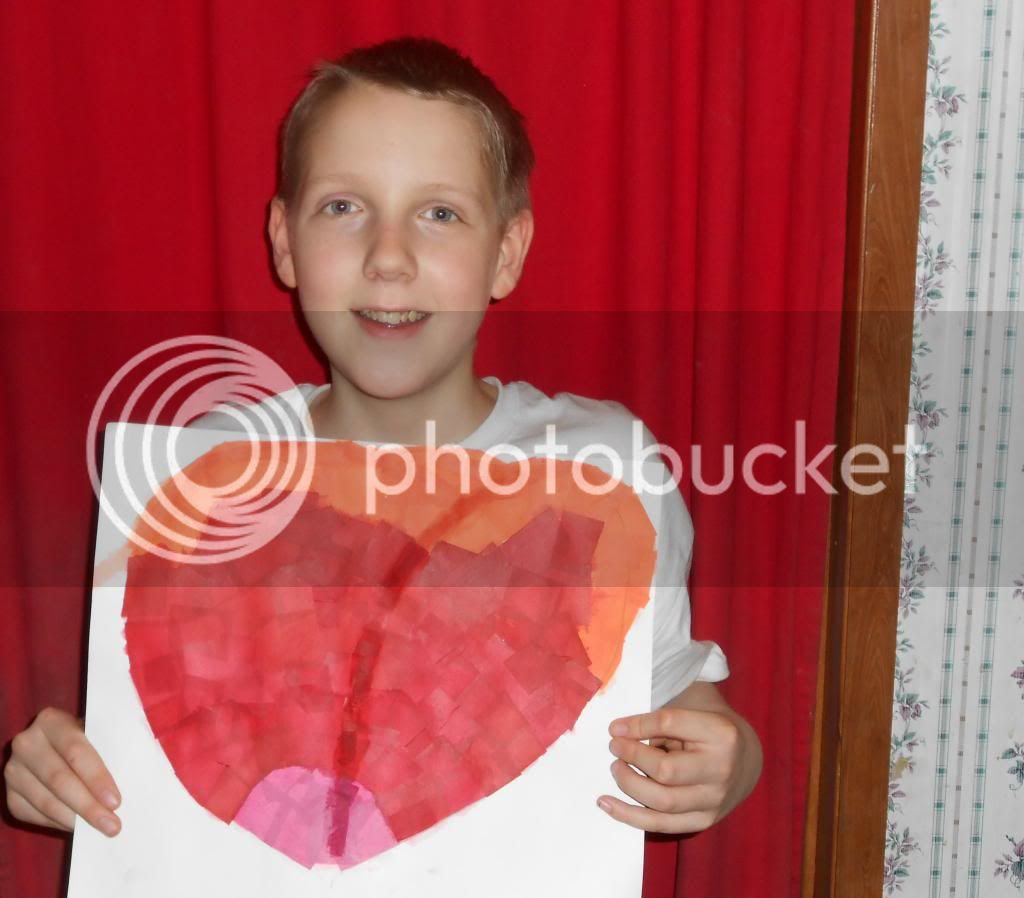 He really didn't love this though.  Maybe had we found a pack of tissue paper that gave him more "red" choices, or if we had chosen a less "red" poppy... but Thomas did feel he learned a bunch from the process.  And he spent a bit of time then working on the second project.

Thomas also had a great time talking with Jim and Laurel at the See the Light booth at the Omaha Teach Them Diligently convention. He wanted to bring some of his stuff with them and get some personal pointers, but we were a bit busy.  I wanted to get a photo of him there, and I forgot.  But if you ever get the chance to visit See the Light's booth at a convention, definitely stop in and say "hi" to them!  Both Jim and Laurel were so very encouraging.

Poppy Collage is available for $14.99, and is intended for ages 10 and up.  We loved it, and hope to accumulate the entire set.

Members of the Schoolhouse Review Crew reviewed ten different See the Light DVDs including others in the Art Projects series, and some from their Bible Stories.  You can check out their reviews by clicking on the banner here: