What's in the Bible? Vol. 1 {a Family Christian review and giveaway}

Disclosure of Material Connection: I received this a DVD to give awayfree from Family Christian Stores through the Family Christian Blogger program. This post does contain affiliate links.  I was not required to write a positive review, and any affiliate relationship does not impact my opinions. The opinions I have expressed are my own. I am disclosing this in accordance with the Federal Trade Commission’s 16 CFR, Part 255: “Guides Concerning the Use of Endorsements and Testimonials in Advertising.


We love Buck Denver in this house. 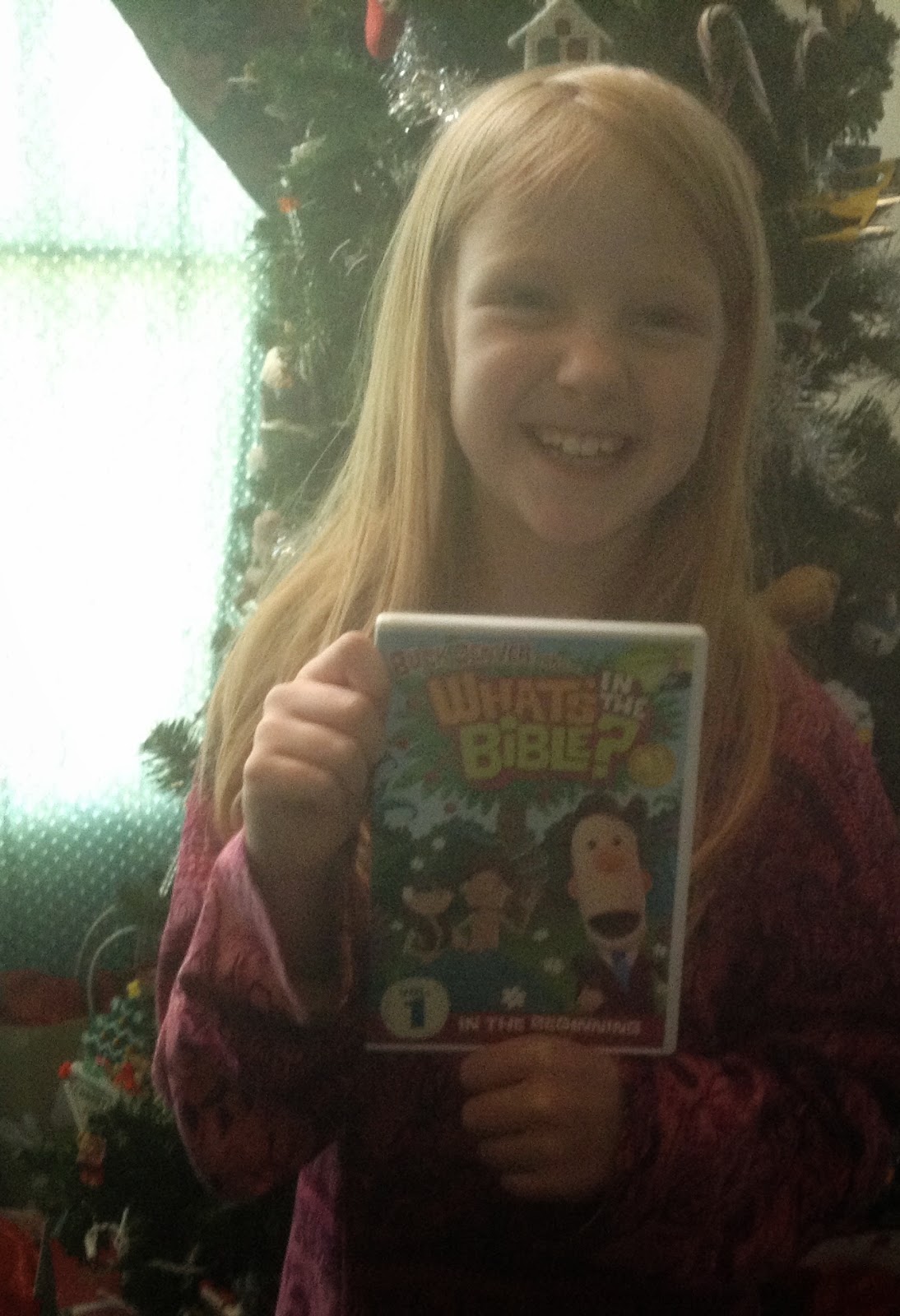 In fact, the couple of titles of What's in the Bible that we don't already own are going to be showing up tomorrow morning as Christmas gifts.

When Family Christian offered me a chance to review this DVD and give away an appreciation certificate, I asked if I could do a give away for the DVD instead, and they didn't need to send me one.  So that is what I'm doing here.

Buck Denver asks... What's in the Bible? Vol. 1 is a fantastic resource that everyone should own.  Phil Vischer (one of the creators of Veggie Tales) is simply fabulous in this series.  The entire series (13 volumes) covers the entire Bible, in a format that is great for absolutely all ages.  My daughter started watching when she was around 3, and it certainly works for adults too.

Each volume of What's in the Bible includes two episodes, lasting 25 minutes each.  That means there are 26 episodes to get through the entire Bible.  The first two episodes cover just what is the Bible (episode 1) and primeval history, Genesis 1-11 (episode 2).

The puppets are amazing, each with a personality of its own.  In Volume 1, we are introduced to pretty much everyone (except Marcy, who shows up in Volume 3).  There are a lot of them -- 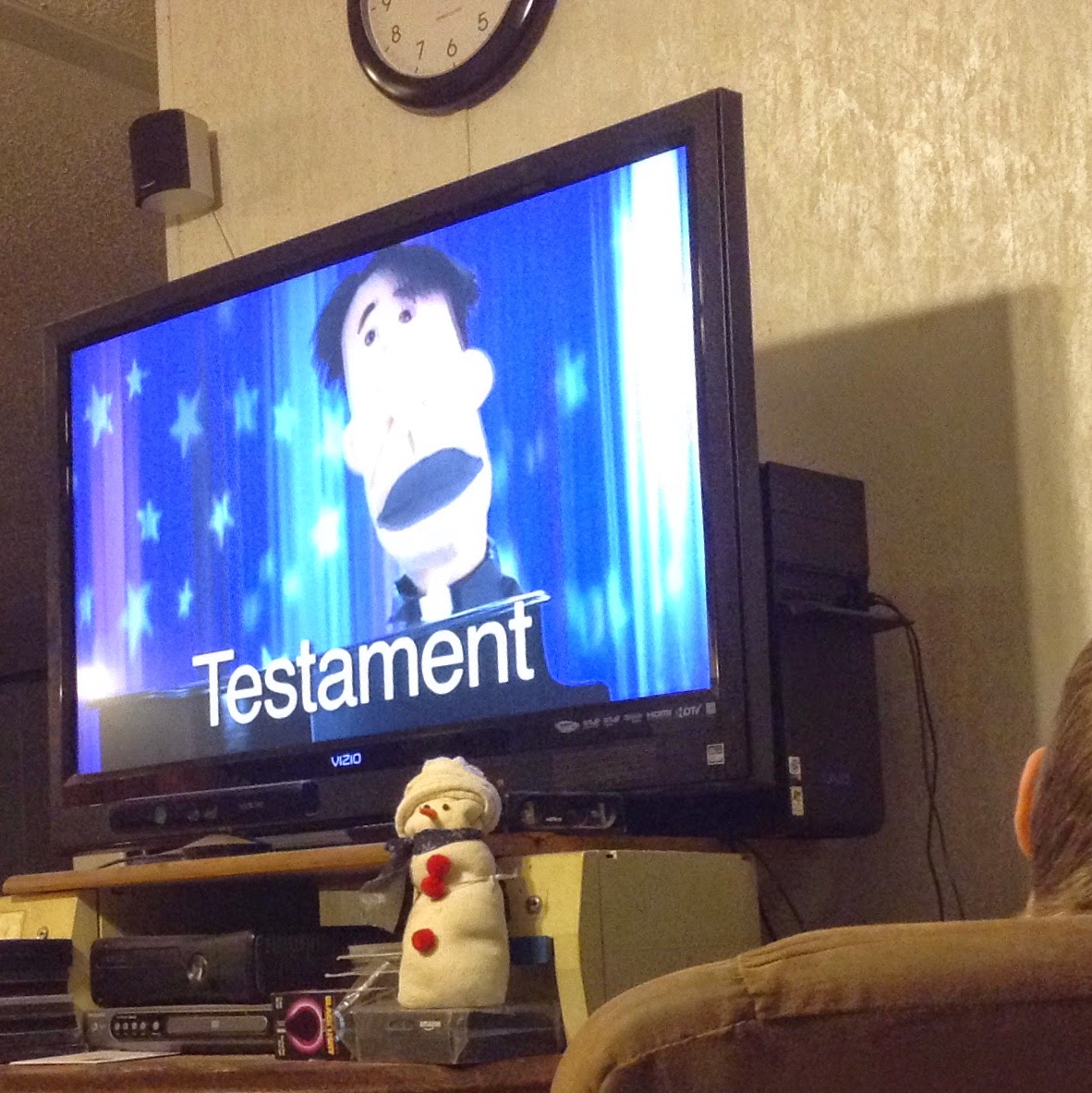 There are also three real people who appear in the episodes.  Phil Vischer answers a lot of questions and helps to move things along.  He's amazing, of course.

The Bentley Brothers sing a song or two, dressed up in crazy Elvis-ish costumes.  The songs are great, and the two of them grow on you.

Here is the beginning few minutes of Volume 1, so you can see most of these goofy puppets for yourself:


One thing I love, which you saw a bit of in the above clip, is that they keep things fairly relevant to today.  Showing multiple Bibles, including one on an iPhone.  Talking about books like Pat the Bunny.  Or games like Tetris.  Mentioning pop culture (American Idol or Green Lantern), or alluding to Finding Nemo, Star Wars.  Or things like patterning characters after Elvis or the hecklers in the Muppets.

Another great thing is that the humor appeals to multiple ages.  At one point, Sunday School Lady is singing a song, and she tells Magic Flannelgraph to take a verse. Of course, we hear nothing.  And she says something to him about how she'll sing instead, because he's flat.  That joke went totally over the heads of my youngest kids, as they weren't grasping the double meaning of the word "flat" at all.

There is also a church edition, and I am really wanting to use that in our Sunday School.  Each volume contains four weeks worth of lessons.  I think working through these would be a simply fantastic way to spend a year.


Intrigued?  You could win a copy!

We have never seen one of these DVD's before. My family would watch it, the kids the most of course :)

I have never seen this DVD before-my kids would enjpy it.

We have Volume 10 (Jesus is the Good News), and we love it! My boys are constantly asking to "watch the Bible" or "watch puppets."

The Why Do We Call it Christmas dvd also made its way under our Christmas tree, but we haven't had a chance to watch it yet. I really appreciate that these are fun, but not at all watered down!

We still love VT and are fans of Phil Fischer....but have NEVER seen a WITB episode! Crazy.

Is it as cold at your house as it is at ours today? A magpie landed on our fence and looked twice his normal size with his feathers all puffed out!

We love Buck Denver! We have the Christmas DVD and Volume 10, the first one in the New Testament, but haven't seen this one! Thanks for the giveaway!

We reviewed the Christmas one, and I'd love to add this one to our collection. :)