'Til We Meet Again {a Tyndale House Blog Network review} 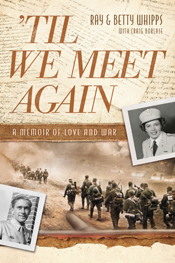 'Til We Meet Again by Ray and Betty Whipps reads like a novel, possibly even like a historical romance novel, but it is the true story of this amazing couple.  The bulk of the story is told from Ray's point of view, with letters from Betty inserted between chapters.

Ray and Betty met in Europe during World War II, after Ray had been wounded, ending up being cared for by Betty.

The book had me at the opening chapter.  It starts in the present, with Ray having nightmare/flashbacks to the war.  He heads down to breakfast, and Betty says something to him about having a tough time of it again last night.

That was the point where I identified with Betty.

Let's see how the publisher describes this book:


Ray and Betty Whipps both served in Europe during WWII: Ray as an infantryman under General Patton in the trenches of Normandy, Paris, and Belgium, and Betty as a field nurse in Cherbourg, France. The two met when Betty tended to Ray after he was injured in a mortar blast. Both strong Christians, the two bonded over their shared faith, and as Betty nursed Ray back to health, they fell in love and vowed to marry after the war. However, soon after Ray returned to his unit, he was captured by German forces and held captive in Stalag VII, Germany’s largest prisoner of war camp. It was there that Ray’s faith was put to the ultimate test as he endured the most horrific weeks of his life—weeks marked by brutality, malnutrition, back-breaking labor, and near-constant death. The only thing that kept him alive was the dream of someday reuniting with Betty.

Told in first person from Ray’s perspective, with personal wartime letters from Betty interspersed throughout, ’Til We Meet Again is a sweeping love story set amid the backdrop of WWII. The perfect combination of “in the trenches” battlefield accounts and classic 1940s romance, this memoir reads almost like a novel. It is an epic story of faith, hope, and love, and a nostalgic look back at one of the most memorable periods in American history.

Following Ray's story is just amazing.  He dreams of being a pilot, is on track to do so... but he is hindered by his math skills, or rather his lack of math skills.  While changing gears, he ends up drafted into the Army.  After Basic Training, and a stint in helping to train others, he ships off to England right about the time of D-Day.  He ships over to France about a week later, and starts the crawl of trench warfare towards Germany.

His story-telling feels so real, so I had to read parts of it to my husband to get his take.  Now, my husband is far too young to have fought in World War II, but his grandfathers did.  His father was in the Navy in Vietnam.  And Dale was a grunt in Operation Just Cause in Panama.  I read this part, at the end of chapter 10:


Despite the fact that it was an Army tradition, griping never really seemed to help all that much.  I still felt just as cold and just as unsafe.

Dale laughed.  And said, "He definitely knows something about being a grunt."

You simply MUST watch this video.

I loved this book.  I am making my teens read it as we study World War II.  In spite of my categorization above that this is a good historical romance novel, it is totally appropriate for teen boys.  There is a lot of battlefront action that conveys not just the horrors of war, but also the everyday heroes.

Disclaimer:   I received this book for free from Tyndale House Publishers.  No other compensation was received.  The fact that I received a complimentary product does not guarantee a favorable review.
Posted by Debra at 9/16/2015 06:30:00 AM