Finding Noah in Theaters on Thursday {a FlyBy review} 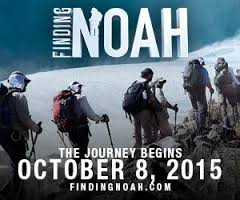 One of the really fun things we get to do as reviewers is that sometimes we get to watch a preview of a movie coming out soon.

I'm not a big fan of movie theaters.  Some people love going to the movies.  My husband, for instance.  I love the chance to watch at my convenience, without strangers around, and without driving an hour to get there.


None of that really has anything to do with this particular review though.

Finding Noah is going to be in theaters on Thursday, October 8 only.

You can check out other YouTube videos about the movie too.

The publisher describes this film:


For over 2,000 years, man has been searching for the final resting place of Noah's Ark.  Though there have been many attempts, few have been able to fully explore the one place specifically noted in the Bible: Mount Ararat.  Located in Eastern Turkey, Agri Dagh or "The Painful Mountain" is the tallest mountain in the region and lies in the very center of a centuries old, geo-politically unstable hot spot.  With constant threats of deadly rock slides, hidden crevasses, and glacial ice falls, the Kurdish Rebel held mountain poses great risk to any explorer, let alone those performing a thorough scientific investigation.

Join director/producer Brent Baum and the FINDING NOAH film crew as they follow an expedition of intrepid explorers on a perilous trek up to Mt. Ararat's desolate summit.  There, using state of the art technology and real-time satellite imagery, this team of archaeologists, scientists and professional mountaineers will begin a grid work of exploration unlike any before, hoping to finally resolve the age-old question:  did Noah and his Ark actually exist? 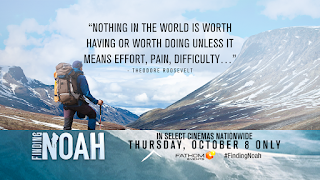 We did enjoy this film.  It was a bit confusing at first, as it was discussing things like finding King Tut's tomb and finding the Rosetta Stone.  In retrospect, that did set up the ideas of .adventure and challenge and discovery.  After that, there was some discussion of all of the flood legends throughout the world, with some really nice visuals.

And then we got into the actual explorers and this particular trip.

There was a fantastic blend of live footage, after-the-fact interviews, and other experts chiming in.  That kept things moving forward and gave it a bit of a reality show feel, without any of the bickering or voting off the island aspects.

Watching the scientific process of this exploration was fun.


"Disclosure (in accordance with the FTC’s 16 CFR, Part 255: “Guides Concerning the Use of Endorsements and Testimonials in Advertising”): I did receive a sample of the product in exchange for this review and post.
Posted by Debra at 10/05/2015 12:22:00 PM