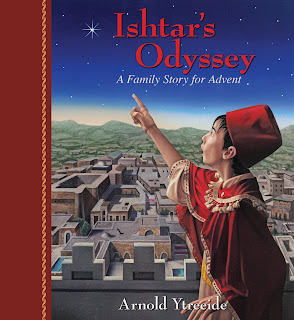 I don't recall at all when we first read through Jotham's Journey by Arnold Ytreeide as an Advent devotional, but it seems it was at least a decade ago.  According to everything I see, it was published in 2008, though.  So a decade isn't possible.

Like so many other really great friendships, it just seems that these books have been part of our Advent lives forever.

Ishtar's Odyssey by Arnold Ytreeide is the fourth title in this Advent series.


A new Advent family devotional from the author of Jotham's Journey! Fourth in a set of Advent adventure books for families, Ishtar's Odyssey follows the ten-year-old son of a Persian wise man as their caravan follows a star across the desert. Ishtar would just as soon stay in the comfort of the palace, but slowly he learns that there's much to see, do, and learn in this world that can't be experienced in school. He eventually meets Jotham, Bartholomew, and Tabitha as he follows his father and uncles in their search for a newborn king.

Arnold Ytreeide's family advent devotionals have become a much-loved Christmas tradition, enjoyed by multiple generations. With over 100,000 in print they include Jotham's Journey, Bartholomew's Passage, and Tabitha's Travels.

If you've read Jotham's Journey, Bartholomew's Passage or Tabitha's Travels, you already have a pretty good idea as to what to expect.  Fairly short daily readings for the entirety of Advent, with lots of cliff-hanger endings from day to day.  The main narrative follows a child who is caught up in some aspect of the Christmas story, and that kid learns a thing or two over the course of the story in a bit of a coming-of-age series of events.  Mostly, though, it is encountering Christ, the son of God, that transforms their lives.  If you've read any of the sequels, you also know that the main character is going to encounter the kids (and other characters) from the past books as well.

A bit of a formulaic approach, sure.  But it still works.

This story focuses on the magi, the wise men from the East.  Ishtar is the rather pampered, self-important son of one of the wise men, and he isn't really a likable character at the start.  It took a bit longer than I expected for my kids to care at all for him, but eventually you can't help but get caught up in the story.

I think it is probably best to read these stories in order, but you do not have to have read the other three to enjoy this newest one.

This is a wonderful Advent tradition.  With Advent starting in just over a week, you still have time to obtain this and start in with this for your family.


Disclaimer:  I received this book through Kregel Blog Tours.  No other compensation was received.  All opinions expressed in this review are my own.
Posted by Debra at 11/20/2015 06:00:00 AM

OOH...I'm looking for something for Advent.

We're a few days into this one and already loving it. A bit predictable at times, but still a great Advent tradition for our family, especially for the youngest child who doesn't remember the past readings.