Ever since I started truly homeschooling, I've been at least a bit drawn to the idea of a classical education.  Memoria Press was one of the first homeschool curriculum companies I was introduced to, and even back then, I looked forward to being able to use their logic curriculum.  For one reason or another, it hasn't happened.

Until now.  The Crew has had the opportunity to review their Traditional Logic I Complete Set, includes a Student Guide, Teacher Guide, DVD's and Quizzes & Tests.

One thing I've loved about every Memoria Press product I've used is that they create a great, basic product without a lot of fluff.  It is usually pretty easy to figure out how to use it.  In the case of Traditional Logic I, there are fourteen chapters, plus an introduction, and each of those chapters tells you what to do for four days of work.  There is also a quiz (or final exam) for all but one of the chapters, so that can be done on the fifth day of the week. 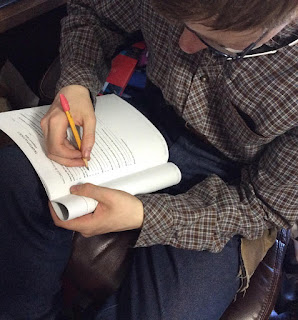 To use this with multiple students, you should purchase additional Student Books and additional Quizzes & Final Exam booklets.  We do the daily assignments as a group discussion, but each of my teens did need their own set of quizzes.

Because I have a senior who is about to graduate, and he was very interested in taking this course, we did follow the suggestions in the introductory material to condense the course a bit.  Instead of taking a full semester (one week per chapter, plus a week on the introduction), he recommends combining a couple of chapters into one week.  Specifically, the recommendation is to combine chapters 4 & 5, 6 & 7, and 12 & 13.  That cuts the course down to twelve weeks.  (We still will not quite complete the course before Connor's scheduled graduation, but I told him that we don't have to finalize the transcript before the ceremony.)

Their reason for suggesting this is so you can spend more time in the second semester, Traditional Logic II, which is more difficult.  We fully intend to move on to this program, but it will be with my two remaining high school students.  Connor has asked if we could at least start it while he is still home, though.

We plan to move on to Material Logic after that.  The jury is still out on Rhetoric though.

Obviously, from all of that, you can assume that we've been liking our logic class!  The course is broken down into three main sections:
The teens have been enjoying the course.  They like the systematic approach that takes us through classical logic step-by-step.


Go check out other Crew reviews to learn more!  I've also been using D'Aulaires' Greek Myths and Book of Astronomy Set, but you'll need to go visit other blogs to see reviews of those.  I will say that this is my second time through the Memoria Press Greek Myths set, though, and it is even better this time around!