Recently, I've had the opportunity to read the first two books in The Remnant Trilogy by Tim Chaffey and K. Marie Adams.  What fun!

The basic idea of the series is to present an obviously fictional account of Noah -- yes, that Noah -- from before the flood.  Since we learn practically nothing about his first years in the Bible, there is not a whole lot to go on.

In general, I worry about this whole idea, especially with biblical characters.  This story does work for me though. 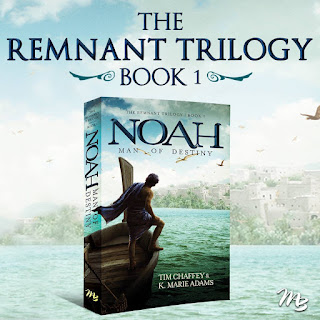 The first book is Noah: Man of Destiny.  The book is described as a coming--of-age story, and that is a great description.  Noah is approaching the age where he is considered to be a man, his Rovay, which happens at age 40.

He works with his family, farming, but sneaks off to do various woodworking activities every chance he gets.  He ends up getting the opportunity to go learn the craft he loves, but that means leaving home and learning a lot more about the world.

The Bible does tell us that Noah was righteous.  The Bible also tells us that the world was pretty wicked in those days.


I don't know about you, but I don't often stop and think about those two facts together.

What would it have been like for a young Noah to make his way as he is trying to find his place in the world?

That's basically what this book addresses, with an emphasis on how this could be how things were. 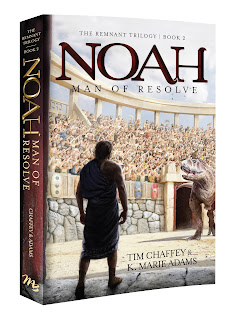 Noah: Man of Resolve is the second book in the trilogy.  Picking up where Man of Destiny leaves off, we get to continue as the world just gets even more wicked, and Noah finds himself struggling with his faith.

This book continues to bring out some thought-provoking concepts about living right in an environment of evil.

The coolest part is at the end, where there is a final section talking about what we do know from the Bible and why the authors made the choices they did. Such as why thy chose 40 as when you would cross from childhood to adulthood.

I do look forward to Book 3.


Disclaimer:   I received these ebooks for free from Master Books.  No other compensation was received.  The fact that I received complimentary products does not guarantee a favorable review.
Posted by Debra at 1/31/2018 11:00:00 PM

hmmmm, I might need to borrow these from you sometime for my summer reading! ;)