The Promise of Dawn: a Bethany House review

I’ve read quite a few books by Lauraine Snelling before, primarily her stories that take place in the fictional town of Blessing, North Dakota, which is set somewhere just north of where my father’s family immigrated to from Sweden.  Her characters emigrated from Norway and formed a community there, and I enjoyed reading about them in the Song of Blessing series.  You can read my review of From This Day Forward, the fourth book in that series. 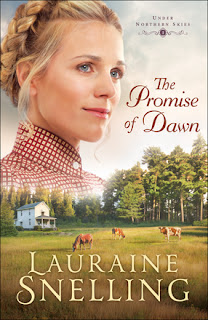 The Promise of Dawn, the first in the Under Northern Skies series, follows another part of that family as they move to northern Minnesota and begin a new life in this new world.  I don’t have the same personal ties to logging in that state, but my German and Polish families came to central Minnesota around this same time period.

Let me start with the publisher's description:


In a Compelling New Saga, One Family Strives to Make Their Own Future
Opportunities are scarce in Norway, so when Rune and Signe Carlson receive a letter from Rune's uncle, Einar Strand, offering to loan them money for passage to America, Rune accepts. Signe is reluctant to leave her home, especially as she is pregnant with her fourth child, but Einar promises to give them land of their own, something they could never afford in Norway.

But life in Minnesota is more difficult than Signe imagined. Uncle Einar and Aunt Gerd are hard, demanding people, and Signe and her family soon find themselves worked nearly to the bone to pay off their debt. Afraid they will never have the life they dreamed of, she begins to lose her trust in God. When the dangers of the North Woods strike close to home, will she find the strength she needs to lead her family into the promise of a new dawn?

I enthusiastically started reading this story, and for whatever reason, I totally bogged down.  I absolutely could not get enthused enough about the characters or the story to read more than a few chapters.  And then the book sat for months, taunting me, as I did promise to review it.


I picked it up again, read an additional chapter, and set it back down.

A few months went by, and I told myself I simply had to read this book.  This time, however, I started over.  And this time, I was completely sucked in starting in about the third chapter.  I did not set the book down until I had read the very last word.  I immediately checked to see if the second book in the series was out, and was thrilled that it was.  I read that cover to cover as soon as it arrived.  Two books into the series, and I can absolutely say that I love this series more than the books about Blessing.

I have no idea why there was such a roadblock the first time I tried to read this.  I have to assume there was something going on in my life that just made it impossible for me to continue.

This book follows Signe, her husband Rune, and their three sons, the oldest of whom is fifteen.  Signe has recently discovered she is pregnant, and having lost a few children since the birth of her youngest son, that does make this journey to America that much more traumatic.

They arrive, unprepared for much of anything they will face.  Things are far more difficult than they imagined, and while some of the conflicts of the story resolve by the end of the book, not all do.

Another thing is that this isn’t a romance.  While there is a wedding in the story, it happens the very first chapter, before Rune and Signe leave Norway.

One of the things I really loved about the Blessing series was that you felt a bit like you were dropping in for a part of the lives of the folks of this town.  As you finished a book, there were things that hadn’t been all wrapped up, and you knew that there were more stories that could be told, and maybe the next book would answer some of those questions.

That feeling is even stronger in this series, and that is speaking for both this title and book 2, A Breath of Hope.  I think what I truly love, though, is that the primary conflict – the one resolved by the final pages – isn’t romance.  There’s a hint that Book 3 (coming in November) might be a bit more romance-driven, which would be fine.  It isn’t the central story of the first two books though.  I find that refreshing.


Disclosure:  Bethany House provided me with a complimentary copy of this book for review purposes.  No other compensation was received, and all opinions are my own.
Posted by Debra at 9/17/2018 01:36:00 PM