Book Review: The Mirror of N'De 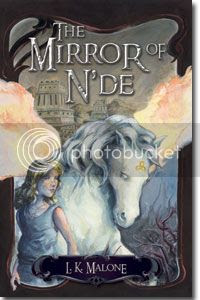 Wow.  Just wow.  I want to purchase a case of these and hand them out to a lot of the young people in my life... and to suggest that their parents read it too.


I don't know what exactly I was thinking when I signed up for the LitFuse Blog Tour
for The Mirror of N'De by L. K. Malone.  I like fantasy. I like some Young Adult titles.  But a debut novel, with a title I can't pronounce? (I went with something like nuh-DAY)  And the publisher's description doesn't make me anxious to pick it up:


In the mythical city of N’de lives thirteen-year-old Hadlay and her people, the Ramash. Scorned and abused by the unloving and absent Emperor, the Ramash are poor people, placed second to the ruling class of the Oresed. Young but bold, Hadlay rages against the injustice in her city. When she is chosen for the honor of serving the Prince in the Tower, she hopes to find a way to right the wrong... but soon discovers that things are worse than she believed.

While Hadlay works to better her people’s condition, she struggles to abide with the abusive Oresed and understand the meaning of her dreams in which a fantastical white horse appears to her and speaks in riddles. When Hadlay stumbles into one of the Tower’s secret rooms, she discovers a hidden mirror that doesn’t just show her reflection, but reveals much more: the horse’s name is Sirach and he has a plan to save the children of N’de, if only Hadlay can bring them to the mirror. Hiding her knowledge of Sirach from the Prince, Hadlay sets out to do Sirach’s bidding. But when Sirach’s presence is revealed, Hadley’s life is in danger and the only way to save her is for Sirach to give up his own.

Crafting powerful narrative and creative characters, author L. K. Malone spins a compelling tale that combines exciting entertainment and the Christian story. In The Mirror of N’de, readers will empathize with the desires of an oppressed people, will anger at the affliction of a cruel adversary, and ultimately rejoice with the revelation of a Savior.

I am so glad that I did sign up.   Check out the video trailer (which tells me that I did pronounce N'De right!):

I don't even know where to begin in describing this book.  From the description, it sounds like a fantasy re-telling of the story of the Jews under Roman rule, and the coming of Christ.  And it is.  But it isn't just that.  The plot is rich and multi-layered.  There is so much to think about -- loyalty, betrayal, the consequences of your actions...

And on another level, it is a standard coming-of-age story.  Most of the characters are in their 13th year, but the complexity of the plot makes this a novel that would appeal to kids and adults.

I will be handing this to my kids.


The publisher is sponsoring a $50 Amazon.com giveaway.  I know I can always find something to buy at Amazon!

If you tweet we'll capture your entry when you use @litfuse. If you share it on Facebook or your blog, just email us and let us know (ckrumm@litfusegroup.com). Easy.


Disclaimer:  I received this book through LitFuse, and by blogging about it I earned one entry in the above mentioned giveaway.  No other compensation was received.  All opinions expressed in this review are my own.
Posted by Debra at 12/06/2011 09:01:00 AM

Thanks so much. I wish I could send you a case just for this kind review! And I love that you got some of the things I hoped would come across in the story.

Yup, you got it right. NuhDAY. Think the Hebrew pronunciation of Eden, only in a mirror...