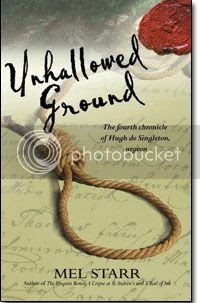 Last March, I reviewed a book called A Trail of Ink by Mel R. Starr.  I loved it.  My question then was "What would CSI look like in 1365?"

Well, Unhallowed Ground gave me another chance to visit CSI Medieval England.  This is "The Fourth Chronicle of Hugh de Singleton, Surgeon" and is every bit as wonderful as the third.  I have to get my hands on book two (I read the first one, The Unquiet Bones, after reviewing #3).


The fourth adventure of Hugh de Singleton, medieval surgeon and detective, finds Hugh investigating what seems to be a suicide of one of the town's scoundrels and his longtime enemy. Though at first reluctant to pursue a mystery that no one else sees, Hugh and and his new wife Kate set out from the town of Bampton only to follow the clues back in order to discover which of their friends committed the murder.

These books are fabulous.  Starr taught history for years and years, and is a public school teacher I would have loved to have... for me or for my kids.  I just know that, even though I've certainly never met him.  So this book just has that authentic feel that totally draws me in.

Part of the authenticity, though, is in the language used...  like the very first sentence of the book:  "A fortnight after Hocktide, in the new year 1366, shouting and pounding upon the door of Galen House drew me from the maslin loaf with which I was breaking my fast."

The very beginning of the book has a 5 page glossary, where words like Hocktide and maslin are defined.  I found myself referring back to the glossary frequently in the first couple of chapters, and then being sufficiently "into" the story to not need it as much.  But the writing style makes it so those first few chapters do take a bit extra mental energy.

I love the premise of this book.  A horrible man has died of an apparent suicide.  Hugh has suspicions that it is murder made to look like a suicide.  Everyone would prefer he just leave it be, as the neighborhood is just relieved to be rid of this despicable man.  Hugh struggles with this -- does he pursue the killer, even though it very well could be a friend?  Especially given all the horrible things this man had done while alive?

Another thing I love is that Hugh has just a "normal person" feel to him.  He's smart, but not necessarily brilliant.  He has personal feelings about the stuff he's involved in.  He makes mistakes and backtracks to figure out where to go next.  He's just a real guy next door type of character.  You can just see him as a fairly ordinary guy.


One thing to note... in my last review, I talked about using this series with my kids.  This title does have a few issues that are brought up that may not be appropriate for younger readers... such as a rape that leads to a pregnancy (the rape occurred roughly 9 months ago and isn't described) and discussion about whether or not rape can lead to pregnancy... the generally accepted theory was basically that if the woman is unwilling, God will not allow conception to occur.  So pregnancy proves the woman was willing.  Of course, all of that is using "old" words, not words like "rape"... and I though it it was really interesting to think about.  But since I mentioned using this with kids, I thought I better bring it up.

Oh, and you can read the first couple chapters here.


Disclaimer:  I received this book through Kregel Blog Tours.  No other compensation was received.  All opinions expressed in this review are my own.
Posted by Debra at 1/24/2012 11:18:00 AM

I'm half way through this book and really enjoying it. I have learned a lot and love the writing of Mel Starr! I was a bit intimidated when I saw the glossary at the beginning of the book but quickly recovered.:) Can't wait to read the second half! Lori

oh great. Now I have to go find these books. I think my "to read" pile is larger than my "have read over the last 40 years" pile. Ok... it just feels that way. I bet even my husband would want to read these!