Review and Giveaway: The Mighty Macs 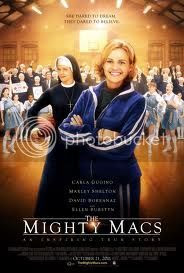 My family and I sat down the other night to watch a movie.  This time, it was The Mighty Macs, which is being released on Tuesday.  This is based on a true story... that of Immaculata College and the first women's basketball championship.

Cinderella Stories are always enjoyable to watch, and this movie is no exception.  Even though it is focused on women's basketball, my houseful of males enjoyed it, and this has earned a spot on our DVD shelf.

There were a couple things we didn't like -- but given the shrill rhetoric spouted in the culture at large about women's roles in 1971, this movie did stay fairly tame.  My husband was bothered a bit by some of it.  But I saw the main message of the movie as one of pursuing your dreams and not saying no.


It's 1971. Cathy Rush is a woman ahead of her time ... and she's about to embark on an adventure for the ages. A new era is dawning in the country and in collegiate athletics, where a national champion will be crowned for the first time in women's basketball.

In the lead up to this historical season, major universities are preparing their game plans to win that first title. Meanwhile a tiny all-women's Catholic college in Philadelphia has a more modest goal: find a coach before the season begins. Providentially, Cathy Rush is about to find Immaculata College.

Recently married, Cathy is dealing with the aftermath of a truncated playing career. While cultural norms would have her staying at home, she's willing to do the hard work necessary to help her new team reach their goals—or perhaps she's just trying to achieve her unfulfilled dreams through them.

From the beginning, her challenges are as imposing as the big-school teams Immaculata will face on the court. Cathy learns there is no gymnasium on campus, she receives little support from the school's Mother Superior, and the school is in dire financial straits. To top it off, she may not even have enough players to field a team!

While it appears the Macs don't have a prayer, all hope is not lost. With the help of Sister Sunday—a spunky assistant coach—and the support of a booster club of elderly nuns, Coach Rush creates a new game plan that just might bring the team—and the school—together.

Will this pioneer buck cultural norms and spur her rag-tag team to unexpected heights? Or will her hard-driving ways create a wedge between the coach and everyone around her? One thing's for certain: there's never been anyone like Cathy Rush at Immaculata!

The acting is solid, the characters seem realistic.  We enjoyed the movie -- and I loved the chance to watch a family-friendly sports movie that wasn't about football.  The best part was all the very 70's clothes in the crowds at the basketball games!  My kids enjoyed hearing about their mother's purple plaid pants...

Okay, well, maybe the fashion wasn't really the best part.  Truly, I think the best part was the special features.  There is one that is a segment from ESPN, which was fabulous.  And the "making of" feature is exactly what I want in a "making of" segment -- why was this movie made, including lots of interviews with the real people, and lots of discussion about the messages they wanted to convey in this film.

Would you like to win one?  I'm excited to be able to offer one to give away:

Disclosure of Material Connection: I received one or more of the products or services mentioned above for free in the hope that I would mention it on my blog. Regardless, I only recommend products or services I use personally and believe will be good for my readers. I am disclosing this in accordance with the Federal Trade Commission’s 16 CFR, Part 255: “Guides Concerning the Use of Endorsements and Testimonials in Advertising.”
Posted by Debra at 2/19/2012 02:22:00 PM

My favorite sports movies are all baseball ones :). I cannot remember the title of the one that I want to put as my favorite. It has Kevin Costner in it (and no it's not Field of Dreams LOL). A more recent favorite is A Mile in His Shoes.

This looks like such a good movie. We wanted to see it at the theater but by the time we figured out it was here, it wasn't anymore! Don't know if it didn't last long, or if we were on "homeschool time" which ticks away so quickly!

I don't know too many sports movies...maybe Angels in the Outfield? I liked that one.

I can only think of A mile in his shoes too, we are not sports fans much around here :)

Most recently I have watched A Mile in His Shoes, but my all-time favorite sports movie is Angels in the Outfield. :-)

I love The Blindside.

A League of Their Own is always a favorite!

My favorite is remember the titans!
rocky.mart@yahoo.com

we love sports dramas. one of my favorites is Glory Road. there are so many good ones, though, it's hard to name just one!

Space Jam is one of my favorite. Thanks
carolwegs at gmail dot com

For the Love of The Game with Kevin Costner! The Best!!
j1man1r66@etex.net

Thanks.
Vadebby at cox dot net

My favorite sports movie would be Angels in the Outfield

My all time favorite is Young Giants (also known as a minor miracle)is an old Soccer movie made in 1983 about an orphanage which was going to be closed and through soccer they managed to save it.. Pele was also acting. There was a Chorus in the song I cant forget "life is not easy but I want to be the best!!"

Mine would be Remember the Titans (Corey Olomon)(olomon@hotmail.com)

Hope you check it out specially the top 3 ^^

facing the giants is a great movie

love love LOVE both Field of Dreams and Talent for the Game!

I love watching Believe in Me and Facing the Giants (my favorite movie), and I'd love to try this one out.

Thanks for the giveaway!

One of my favorites is The Big Green!