About a year ago, I reviewed Demolishing Supposed Bible Contradictions, Volume 1.  One of the things I loved about that volume was the introduction.  I also appreciated the short chapters that you could read in those little snatches of time. 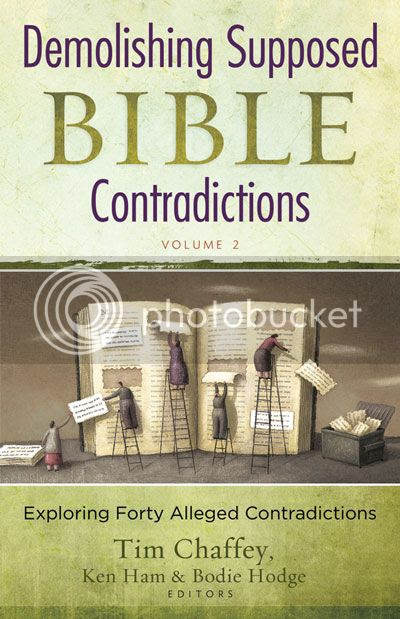 Having the opportunity to review Demolishing Supposed Bible Contradictions, Volume 2 definitely interested me.  Here are 40 more supposed contradictions in the Bible, which are discussed by a variety of people.

Like the first volume, this is a fairly skinny (176 pages) paperback, that showcases forty contradictions in the Bible in fairly short chapters.


The Bible is accurate and without error! Demolishing Supposed Bible Contradictions Volume 2 offers 40 powerful explanations to prove it.

There is an increasing focus in our culture on dismissing the Bible and its authority. Generations of skeptics and the religion of evolution have influenced even some Christian leaders.  By highlighting supposed errors or inconsistencies in the Bible, doubt is created in the minds of believers and stumbling blocks are put up for those trying to present the Gospel. But Biblical evidence disproves the toughest of critics while bringing to light the indestructible power of God’s Word. Tim Chaffey, Ken Ham, and Bodie Hodge of Answers in Genesis highlight the answers to these debates and more:
Demolishing Supposed Bible Contradictions Volumes 1 and 2 are must-have references for every believer who wants to have an answer to give to those who ask a reason for their hope (1 Peter 3:15). Join the battle armed with the sword of Spirit, the truth that will defeat the lies aimed for this generation and those to follow.

I love that the contradictions brought up aren't all in the same category.  Some chapters talked about the meaning of the original Hebrew or Greek.  Some wrapped up pretty conclusively.  Some were a bit more complicated.

The organization is similar to the first volume, with the contradictions put in Biblical order.  It was interesting once I got into the chapter on the Gospels to see how many times issues relating to the differences between how the various writers recorded the same event would come up.  If the Gospel authors were in collusion, as I've heard so often, why in the world wouldn't they have gotten their stories straight and made sure to get their facts in the same order?

Unlike the first book, this one flowed more easily from one contradiction to the next.  With the first volume, I knew that it was different authors writing the various sections.  This volume was just more seamless.

I would recommend both of these books.

Disclaimer:   I received this book for free from New Leaf Publishing Group.  No other compensation was received.  The fact that I received a complimentary product does not guarantee a favorable review.
Posted by Debra at 7/15/2012 06:23:00 PM

Thanks for your honest review on this book. I had seen it and wondered how it was. Hope you have a great week! :O)