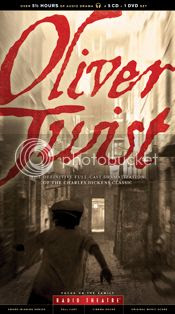 We listen to a lot of audiobooks.  Mostly in the car.  Besides church (a three minute drive) and the bookmobile (a fifteen minute drive) everything we go and do is roughly an hour, one-way.  Audiobooks fill a need for us to redeem that drive-time, and oftentimes to get some schooling done besides.

When I had the opportunity to review Oliver Twist, the latest Focus on the Family Radio Theater production, I simply had to do it.  Especially since we were planning a trip "home," which is roughly 2400 miles round-trip, during the Blog Tour time period.

So yesterday, while driving from Nebraska to Minnesota, we were absorbed by this 5-disk production of Oliver Twist.  At least, everyone over the age of 8 was.  The youngest two zoned in and out quite a bit.

Focus on the Family Radio Theater does a fabulous job.  As always.

If you haven't read Oliver Twist (I hadn't) there is a basic synopsis of the plot in this description from Tyndale:


An audio drama of the highest quality, Oliver Twist was recorded on location in London with an award-winning cast. This classic story will steal your heart as the timeless characters are brought to life in Focus on the Family Radio Theatre’s edition of Charles Dickens’ beloved tale. This amazing audio production comes on five CDs, with a bonus DVD that includes behind-the-scenes production footage and the documentary Modern Day Oliver. Purchase of the product also benefits Focus’s “Wait No More” adoption initiative.

With cinema-quality sound and an original soundtrack, this audio drama tells the story of a young orphan sent from a child farm to begin life in a workhouse. After committing the unpardonable offense of asking for more food, Oliver is sent off to apprentice with a coffin-maker whose wife mistreats him. He runs away to London, where he meets the Artful Dodger and Fagin, who trains kids to be pickpockets. Despite his many trials and hardships, he finally gets his happy ending, bringing hope for redemption to all around him.

I was familiar with the story, and it sure seemed that this production stayed fairly true to how Charles Dickens wrote it.  From reading a reasonably detailed plot synopsis, I noticed only a couple fairly minor differences between this production and the original story.  One was that 'implied prostitution' was not really implied, or at least was far more subtly implied.

Oliver Twist can be a rather dark and depressing tale in spots.  It is dealing with some pretty harsh realities of that time, and it does not shy away from the beatings and the hunger.  But this story is so much more.  This is truly a tale of good vs. evil -- virtually all the characters are clearly one or the other.  This is clearly a tale with messages that still needs to be told today. Unfortunately.

The cast is fabulous (and all are British!) and the music and sound effects enhance the story.  This production convinced Connor that he definitely wants to read more Dickens.

There is a DVD included with special features -- a "making of" segment was totally fun.  It's great to see the actors behind the voices!  There is also a segment on modern-day Olivers.  You can view a part of that here:

The one complaint we had about the production is that, being radio theater, they rely on sound cues to help us to know where things are taking place and to move the story along.  Those aren't always easy to catch when listening in the car.  You can listen to a sample, or watch a bit of the making of documentary, at the Focus on Family Radio Theater website.

Everyone, however, thought it was a fabulous way to pass through Iowa.

I highly, highly recommend this production.  You can purchase it either as a download or as CDs.

Disclaimer:   I received this production for free from Tyndale House Publishers.  No other compensation was received.  The fact that I received a complimentary product does not guarantee a favorable review.

I love Focus on the Family's radio theater! I'm stopping by to make sure I follow you from the Review Crew. :-)

We loved Oliver Twist and we really enjoy Focus on the Family radio. We'll have to listen to the story now.

Stopping by from the Crew!

I loved the Oliver Twist audio book too!! Trying to get my husband to pop it in for his long drives.