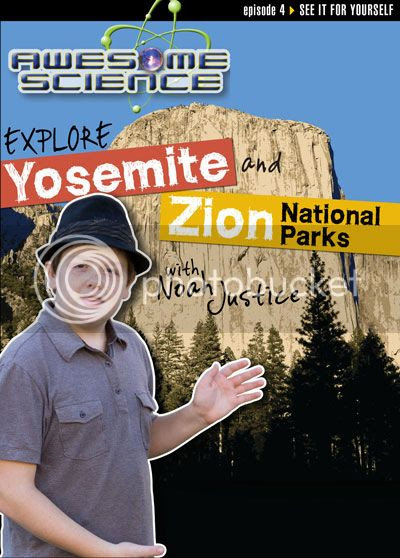 Today, I get to talk about probably my favorite science DVD series ever.  Awesome Science, hosted by 14-year-old Noah Justice, is just so much fun.  We own four of these titles now (and the other two are on my "to get" list) and they just keep getting better.

This title, Explore Yosemite and Zion National Parks, was especially fun for me.  I've never been to either park, nor do I really know much about them.  I grew up visiting National Parks all the time, but we just never got to these.


The first DVD series for teens by teens showing how science & the Bible agree!
The Awesome Science video series takes teens and adults on a field trip around the world to explore geologic and historical evidence which supports the biblical record. Innovative, high-quality, and designed to make science fun, this new series for the whole family helps discover evidences that the Bible is the true history book of the world!

My teen/tween boys (12, 14, 15) love the Awesome Science DVDs.  My 8-year-old enjoys them too.  The 6-year-old, however, wants nothing to do with it... well, except she enjoys watching the bloopers in the bonus features.  So I'd say this is good for somewhere around ages 8 and up.  Your mileage, of course, may vary.

I think what my boys like the best is the high-energy style that Noah brings to the series.  He spits out a lot of information, and is always so upbeat.  And he's a peer, so it is just more fun for them to watch.  The blurb above says that this is by teens, for teens... but I think this would appeal to tweens and adults.

Connor, my oldest, gets a little frustrated sometimes that some of the topics addressed are just "too general, lacking the specifics.  Okay, so there are 'a dozen' whatevers that are inaccurate.  Can't he give one or two actual examples?"  However, he also praised the video where there is a fair amount of detail given on one topic -- like radiometric dating, in this video.

I think it inspires us to do some of our own research. In addition, hearing Noah present the topics drives my kids to explore our book and DVD shelves to see what else we have around on some of these topics.

I grew up visiting National Parks on a very regular basis.  My kids aren't blessed with that opportunity, but through this series, we get to see various parks, and we get to hear about the history and geology from a non-evolutionary point of view.  It does not get much better than that.  Well, I'd rather do live tours, I suppose.  But we can't do that for under $20 ($15 for the DVD, $4 for the study guide).

The study guide is great.  It includes some text, and it is very nice to see some of this in print instead of watching/listening to it.  There are some worksheet types of activities, which are great for us to run through orally, just to see if everyone was paying attention.  It also has discussion questions for each section.

You can see what other Moms of Master Books had to say about this episode of Awesome Science.  And there is a Facebook party coming up on January 17 (Thursday) at 7:00 MST where you could win cool prizes, probably including this title, and discuss the DVDs


Disclaimer:   I received this DVD for free from New Leaf Publishing Group as part of the Moms of Master Books program.  No other compensation was received.  The fact that I received a complimentary product does not guarantee a favorable review.
Posted by Debra at 1/10/2013 04:44:00 PM