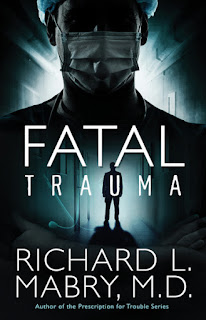 A friend of mine has been telling me for years that I really need to check out books by Richard Mabry.  I've looked a couple of times, and they sound appealing.  Medical suspense is certainly a genre that appeals to me, particularly when it is written by an actual doctor.

So when I had the chance to review Fatal Trauma, I simply had to go for it.

She was right to rave about Mabry's books.


A gunman who has nothing to lose faces a doctor who could lose it all to prove his innocence.

When Dr. Mark Baker and Nurse Kelly Atkinson are held at the mercy of a dangerous gunman, the lives of every emergency room patient are at stake. At the end of the evening three men are dead. One of them is a police officer who couldn't be saved despite Mark's best efforts. The other two are members of the feared Zeta drug cartel.

Though the standoff is over, the killing is not, because when the drug cartel loses its members, revenge is not far behind. Facing an adversary whose desires are dark and efforts are ruthless, Mark finds himself under suspicion as a killer, yet still a potential victim. When he turns to his high school sweetheart, attorney Gwen Woodruff, for help, Kelly helplessly looks on, as she hides her own feelings for the good doctor.

At the height of the conflict, three questions remain: Who is the shooter? Who will the next victim be? And can Mark prove his innocence before the gun turns on him?

I do not often find myself completely sucked in to a story within the first couple of pages anymore.  This book?  One paragraph of exposition, and the doctor we are just being introduced to is hearing a crazed gunman shout, "Nobody move!"

That got me involved in the story.

The plot twists and turns, and when you think maybe you've figured part of it out, you suddenly discover another strange piece of the puzzle that makes you second guess everything.  Who can Mark and Kelly trust?  What is true?

I didn't put the book down.  I couldn't.

The medical aspects all sounded realistic, which I'd expect from a physician-turned-author.  I'll be looking for more of Mabry's titles.

Can Mark find out who the shooter is before he becomes the next victim? You won't want to miss the suspense in Richard Mabry's new book, Fatal Trauma. Facing an adversary whose desires are dark and efforts are ruthless, Mark finds himself under suspicion as a killer, yet still a potential victim. When he turns to his high school sweetheart, attorney Gwen Woodruff, for help, Kelly helplessly looks on, as she hides her own feelings for the good doctor.


Richard is celebrating the release of Fatal Trauma by giving away The Perfect Prescription Prize Pack!

One grand prize winner will receive:
Enter today by clicking the icon below. But hurry, the giveaway ends on June 20th. The winner will be announced June 22nd on Richard's blog.

Disclaimer:  I received this book through LitFuse Blog Tour.  No other compensation was received.  All opinions expressed in this review are my own.
Posted by Debra at 6/12/2015 07:30:00 AM

This sounds like my kind of book. I used to love reading medical thrillers, but it's been a while (approximately 9 years) since I've read some. :)