It has been a very busy couple of months here.  One project I took on was to pull every single can off of my pantry shelves, date it, and put it all back in an organized fashion.  I also inventoried it all.   That was a pretty time-consuming project, but it is nice to have it done. 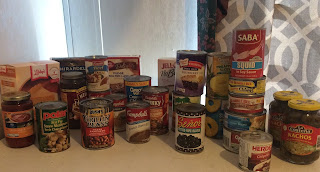 When I say, "put it all back," though, I don't actually mean all of it.  I tossed four or five cans out as they looked scary.  And everything with a best-by date any earlier than 2018, I put on the freezer.

There were a few things, obviously.  And I also grabbed a couple of dessert mixes with old dates and added it to my on-the-freezer stash.

Having spent a lot of time working in food pantries, I've been trained repeatedly in what is okay to use past dates and what isn't.  Scary stuff is things like milk (two of the cans I tossed were sweetened condensed milk) and mayonnaise.  Tomatoes and other high-acid food shouldn't be older than 12-18 months.  But a lot of the other canned goods are supposed to be good for five years.

I don't like stuff to be five years past dates though.  So I want to use it all up.

I've used most of the items in the above picture at this point.  I'm mostly down to things that are a bit harder to use in cooking for a family of six.  Like one little can of crabmeat.  Seriously, how do I stretch that to feed us all?

(I'm planning to either do stuffed mushrooms, or stuffed something else.)

Or things I just don't use and am not entirely sure why I have, such as canned/jarred gravy.

Or strange stuff my husband bought, like a can of squid.  (I know what I want to do with that!  I want to feed it to either the cats or the chickens.) 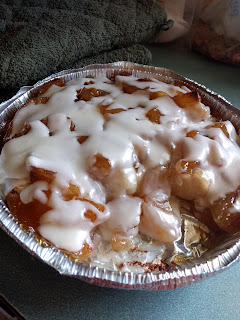 Some of the items are really easy to use.  This was breakfast this morning -- cinnamon rolls with apple pie filling.

I made a cake with a can of blueberry pie filling.

I cooked up the can of roast beef, the mushrooms, beef gravy, and probably something else and we had it over mashed potatoes.  That was excellent, and it is probably what I'll do with the remaining beef gravy too.

Stuff like pineapple, jalepeños, and soup just needed to be front and center and those got used up.

It's starting to be harder to use what I have left though.  My goal is to have used it all by the end of May.  I probably could use some ideas.


What I have left:
What would you make?