Oh, how fun! A package arrived from Maverick Books today, and inside that package were three items (prices are as listed on the Maverick Books website on 7/18):
Well, I told the kids that if they picked up the living room, we could listen to the tape from the game, and then we could play the game. You know what I discovered? We have green carpeting. Who knew? I thought it was lego-colored...
So, for the uninitiated, Hank the Cowdog is the Head of Ranch Security -- and the narrator of the stories -- at a Texas ranch where there is always something going on. Hearing about it from Hank's point of view is a lot of fun, as his perspective differs rather dramatically from the perspective of the ranch-hands and other humans he encounters. John Erickson, the author of the series, knows his subject well, being a former cowboy and ranch manager. While a story about a talking dog can hardly be called realistic, well... the stories do feel like they could be being told by a ranch mutt. (And yes, I know the basic plot summary below doesn't sound remotely realistic.)
The tape that came with the game is fantastic. It's 30 minutes of the audio for The Case of the Swirling Killer Tornado. I had three boys (Connor is camping, Trina really isn't listening) rolling with laughter. They cannot wait to play the game. Seeing as I'm still not quite sure what color the chair is, well... that will have to wait.
The basic plot of The Case of the Swirling Killer Tornado is that the dogs are at the house when a tornado is coming. They investigate, and bark at the tornado. Failing to scare the tornado away, they end up flying around in the funnel with a couple of buzzards, eventually landing in a tree. The story is told in typical Hank the Cowdog style, which has substantial boy-appeal. Not saying that girls won't like it here, just stating that it definitely appeals to boys.

Okay, so now for the game itself (it's been a couple hours, and the chair is cream colored, by the way). First, a minor complaint. The spinner takes some getting used to. My 3 year old can't do it (yeah, the game is for ages 5+, but you try stopping her from joining in!). My 5 year old usually has to try a couple times to get it to spin right. I had the kids practice spinning before playing the game, so the older two had very few problems anyway.
Otherwise, the kids are having a ball. Basic rules: each player has two dogs at home and a buzzard elsewhere. You spin the spinner to move your characters around the board, trying to get all three safe in your tree. Other players can knock you back to the beginning, or a tornado can send you forward or backward. We did have a couple of hurt feelings incidents when a character got sent back home because another player landed on him, but that got worked out. 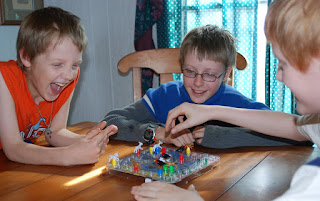 It's a lot like Sorry. Only it is far more adorable (don't tell the boys I used that word!) And it folds up nicely and can go with you in the car. The character pieces fit into little holes on the board, and the spinner is attached. The game is well constructed, and well thought out.
If your kids are already fans of Hank the Cowdog, this game is a fun product. If your kids don't know Hank yet, well, this is a good way to introduce him, as the tape gives a good feel for the characters, and is fun even if you don't like the story.
The other items included are a CD which is sort of a "best of" from various Hank the Cowdog audiobooks. The kids did not enjoy this as much as the actual story tape included with the game, but if (when!) we work through a bunch of the books, I'm sure they will enjoy this product more, knowing the context of the excerpts. 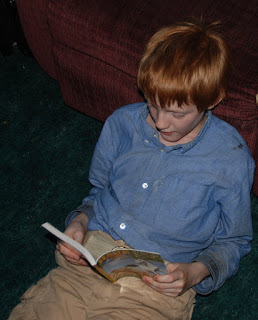 My reluctant reader took one look at the book (after finishing the game) and asked if he could read it (yay!!), and I know when my Boy Scout gets back from camping, he'll polish it off in one sitting. I did.
One thing I do need to note is that the stories do involve name-calling. Usually, that is directed at the dog, but not always. In the book we were sent, the toddler (Little Alfred) calls his mother "Dummy" and is punished for it. The other issue is phrases like "Dadgum it." They aren't terribly frequent, but they are there. I would love Hank more if these two things happened less, but it isn't like my kids aren't exposed to name-calling in real life. They know they aren't supposed to do it themselves. For my family, it is something we can discuss, and move on. If name-calling is an issue for your family, you might want to get a copy of a book from the library before spending any money on audio or books.
Visit the Maverick Books website to see all 54 (!) books, also available on audio (and the author does a fantastic job of creating voices for the assorted characters). Of course, there are other Hank items available too, such as backpacks, stuffed animals, and other toys.
ETA on 7/22: So, Connor read the book this morning in between customers at the bookmobile (he's volunteering there this summer). As expected, he loved it. We discussed it on the drive home, which was a lot of fun. I told him he had to tell me more than "it was good" since I'm supposed to be reviewing it!
What he brought up was how Hank is always taking credit for things he really didn't do, or only played a minor role in doing (scaring the horse off), and he's always blaming someone or something else when something goes wrong. We talked about how that is a natural tendency among people in general, and maybe it isn't all bad, but when taken too far (like Hank!) it can be annoying, or even hurt your credibility.
He brought up how the other characters do this too... Sally May is really frustrated on Thanksgiving, and steps on the dog and twists her ankle. She takes it all out on the dog, blaming all her problems on him. It wasn't exactly Hank's fault that she wasn't watching where she was going. And isn't that a lot like what we all do? We are frustrated with something that isn't working right, and we end up lashing out at whoever or whatever is convenient... generally blowing their wrongdoing all out of proportion.
Fascinating conversation. Seeing as this wasn't a lesson *I* picked up on in my reading of the book, it was even more interesting. And something I most certainly need to work on. I don't want to be Hank... I want to take credit for the good I do, but not for things I didn't really impact. More importantly, I need to not get upset with the slow driver who makes me late, when reality is that *I* didn't leave on time.
Otherwise, you can check out what my fellow crewmates have to say about Hank the Cowdog and Maverick Books at:

I found this to be a pretty thorough review! Do you plan in adding to it or reposting once you've finished the book? Just curious. :-)

My kids are enjoying the game as well. We haven't listened to the audio yet but now I'm looking forward to it even more. Sounds fun!

Lori-- thanks! I hadn't planned to add to it, but since you suggested it I will :) I had read the book when I posted my review. William is reading it -- slowly -- and Connor read it this morning.

Great review. I totally forgot to listen to the CD (my 2 year old did something to the one in the car). I really enjoy Hank -- we took out 5 of his other audiobooks and are having a grand time of it!