I have a nine year old!

My eight year old is now a nine year old.  EEK!!  Where did the time go?  Only yesterday, I was sitting up far, far too late in the night, watching election returns to find out who our next president would be, knowing I had an OB appointment the next day (11/8) and I really should go to bed.

And so I finally did.  And in the morning, we still didn't have a president-elect.  And my OB was concerned about me when I did get there, and rescheduled my c-section to the next day.  I was relieved to not be taken directly to the hospital, do not pass GO, do not collect $200 (my first two were emergency c-sections).  And so I forgot, sort of, about the drama going on in national politics.  A friend volunteered to take my "big" two boys (they were 3.5 and almost 2, hardly seems big now) the next morning.  And as Dale and I drove to the hospital at 'oh way too early thirty' we listened to the news, and still didn't know who our next president would be.

On the operating table, among talk of what to do to perform the c-section, the doctors and nurses talked mostly about Bush and Gore.  And in recovery, the nurses were mostly talking politics as well.

But by then, I was far more focused on getting to my real room so that my very first non-NICU baby could be brought in to me.

Wasn't that all just yesterday?  Last week?  Certainly it can't be more than a year or two?

And now... now I have this big boy who insists that he is actually nine years old.  He spent his birthday doing things like taking out the trash without being asked, and pushing a cart in the grocery store, and looking over some toys at Walmart in order to plot out what to purchase for his siblings for Christmas, and becoming the Denner in his Cub Scout Bear den, and sitting -- and LEARNING -- through a presentation by an EMT on first aid and emergency situations.

Not only that, but he purchased a candy bar with his own money, and split it into seven pieces -- even though only four of us were there when he bought it -- and gave everyone a part.  His was only slightly bigger than the rest. 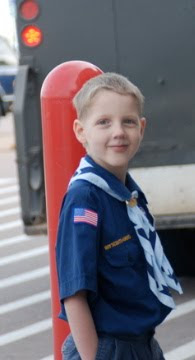 He was also able to perfectly recite the Boy Scout Law (he doesn't need to memorize that for another two years) *and* explain how he is living it out.

When Grandma's dog chewed up his favorite matchbox tank (one of his birthday presents), he did a fantastic job of comforting her (she felt just terrible about it).

He is planning a (very small) birthday party.  He's never had a party with friends.  And his focus in doing this?  He is so very excited about putting together the perfect little goody bags for his friends.  He says he doesn't care if they bring him presents, he just wants to hang out with them a bit, and give away the treats.  And he told me that it is okay if I don't give him any presents, just putting together whatever we can for an inexpensive party is enough.

And to think this is the child who a few hours, uhhh, years ago had us convinced he was going to be living in the penitentiary when he grew up.

Thomas, hon, I am so enjoying watching the man you will become as he starts to emerge from that precious little bundle I held nine years ago.  I am so very proud of you sweetie.