Thank you to all the Veterans

Not that I expect many of them are reading my blog.  Dale does sometimes.  If anyone else does, I'd love to know!

So, living near a very military town, as evidenced by the above photo, one thing we have is a terrific Veteran's Day parade.  My oldest three marched in it this year, and as my tribute to veterans through the years, here are a few photos.  For the record, the loudest cheers were for each and every one of the groups of active military that marched by, and there were lots of them.

It's probably too late to thank a Veteran on Veteran's Day (unless you live with one), but you can thank one tomorrow... 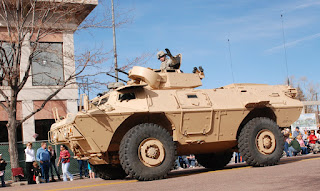 An Army APC -- gotta get pictures of the big tank-stuff 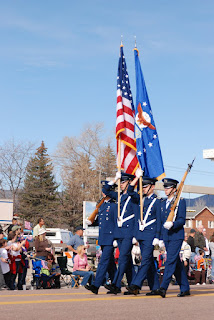 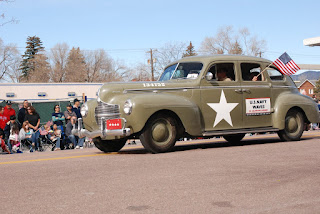 US Navy WAVES, in a way cool car

Both Boy Scouts carrying the VFW banner are mine :)

Re-enactors in fabulously detailed uniforms marching a German POW off to 'captivity' (you have to click this one to see it full-sized and see the detail.) 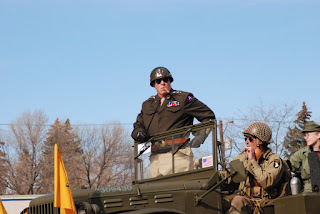 Ol' Blood 'n Guts, but hopefully you knew that.  Someone in the crowd yelled, "Give 'em hell, George!" as he went by. 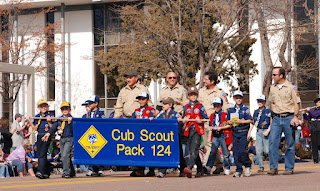 My Cub Scout is in that mass of kids.  He's the furthest kid to the right. 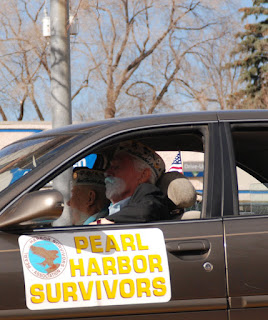 And the best for last... I sure hope we have a few more parades for this car.

The vehicles carrying WWII vets, Korean War vets, and Vietnam vets were great too.  As were the other re-enactors -- including a great group (with women & children) of Civil War soldiers.  The various marching bands and other scout troops, and all the flags...

What a great parade.  And so well deserved.

Thanks ever so much, to all the veterans, to all the current military members... and to those who are more likely to be reading these words -- their wives and families.

I'll be linking other great photos from this parade later.  Dale's working on that.

Hey, I'm a vet. But really...I did nothing; God had me in the military to meet my husband.;) But thanks for appreciating all our protectors!