After a lot of Review Crew items directed at my older children, it has been FUN to have things for my younger two lately.  One gem is Alphabet Beats. 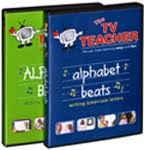 We received the Lower Case Alphabet Beats DVD to review.  My 6 year old pretty much knows his upper case letters, but not lower case.  My 4 year old doesn't really know either.  And my older boys... well, I think all the boys are dysgraphic, so anything that helps them become more automatic is good too.

So, I asked everyone to help me with this review.  (Sneaky, sneaky, sneaky).  My near-teen pretty much rolled his eyes when Miss Marnie came on the screen and started teaching how to write a lower case a.  I let him get out of watching after he gave me opinions on the first letter.  The rest of my group, however, has continued on.

I had my three youngest write their names.  One thing I noticed immediately is that no matter how many times we have sung "Where do you start your letters? At the top!" they all still write pretty much every letter starting at the bottom.  In this case, with the exception of a (all three of them) and s (Thomas).  They also spend a lot of time thinking about each letter.

So we started watching Alphabet Beats.  And we love it.  Each letter has its own chapter, and it is a mere five minutes.  The idea is to watch the chapter first, and then practice.  Or watch it a second time, doing things along with Miss Marnie.

Each chapter is laid out similarly.  Miss Marnie finger traces the letter, chanting what she is doing.  Small a, for instance, is "Up and around back up and down. A."  The writing part has her going on to write on a blackboard, and then on paper.  In between sections, she introduces some vocabulary words that start with the letter, with fun little comments, videos or pictures.  For a, the vocabulary included: ambulance, ask, answer, apple, alone, axe, addition, airplane, alligator, and accordion.

My little two love the DVD, and they can chant every letter we've watched.  Their handwriting has improved drastically, though in some cases it isn't that the letters actually LOOK better, but they are being formed correctly.

My 9 year old was convinced to watch along with the younger two and he is helping them.  It is his job to chant with them, and help be sure they are finger tracing correctly, and then that they are writing them correctly on the whiteboard.  He's learning his letters much better in the process.  And I promised him that the handwriting TA gets to go bowling when the DVD has been completed...

I'm very happy with this DVD.  I want to purchase the Upper Case one.  They are available for $35 each, or both for $64.99.   There is also a Strokes, Shapes and Scenes title, and this summer a Numbers video is supposed to come out.  Those two are $24.95 each.

I do have to point out that while Miss Marnie is very appealing to my little ones, my older kids think she "way over-acts" and that she is just silly.

And you can check out what my fellow crewmates have to say about either the Upper Case or Lower Case Alphabet Beats DVDs at:

Disclaimer:  As part of the TOS Homeschool Review Crew, I did receive the Lower Case Alphabet Beats DVD for free from the publisher.  The fact that I received a complimentary product does not guarantee a favorable review.  It does guarantee a review. A fair review. But I am not going to praise something unless I think it deserves the praise.  If I don't like it, you'll hear that.  And hopefully with enough detail as to why so you can decide for yourself if what I hate about it makes it perfect for your family.  For more about my take on reviews, visit my blog post here.

There is no sense.