As part of the TOS Homeschool Crew, we've had the chance to see a lot of very different products this year.  One that stands out as different from the rest is Wiglington & Wenks. What is it?  A massive virtual world, aimed at the 7-14 age group, that tries to teach some history, geography, nature, wildlife, etc. along the way.

I initially set up free accounts for all three of my older boys (ages 9, 11 and nearly 13) and let them play a bit as free members.  Rather than decide which would become an Elite Quest Traveler, I ended up setting up a "team" account that they share.  So, they can all go in and play on their own with the free membership, but together they are working on the paid membership (membership starts at $5.99 per month, discounts available if you purchase longer chunks of time).

The idea is that you are following a quest... a mission to find various famous figures who have been kidnapped from time, now suffering from amnesia.  You have to find objects that were important to them to help jog their memories.  In doing so, you travel to locations on all the continents (except Antarctica, at least at the moment), and have the chance to learn about these places -- and find more kidnapped historical figures.

I love the idea of it.  In fact, I've been playing some too in trying to write this review, and I am enjoying it.  My kids are liking it as well, the older two a bit moreso.

I do have some concerns.  The big one is the chat features.  Apparently, this is something that is being worked on, but at the moment anybody can say pretty much anything to anyone else, hiding behind the anonymity of the internet.  Okay, there are some limits.  Like you can't type numbers (but you can spell them out).  And there are moderators around who can boot out players who are misbehaving.

My kids have had pretty extensive internet safety training, and they know not to be giving out personal information, so I'm not really all that worried about that part.  Especially when they are on there playing together.  If one is tempted to type things that aren't appropriate, a legalistic sibling is going to stop it.  Gladly. In fact, playing as a group, they tend to actually chat with each other, and rarely type anything into the chat boxes.

Now, while we did not have any issues with inappropriate chat, I do wish there was an option to completely shut chat off (except to be able to talk to the moderators).  I don't know if we would use that option, but I wish I had it available.  I wish there was an option to only use "safe chat" i.e. canned little phrases the kid can choose.  Apparently, these are both in the works, and I will feel better about the program then.

I also question a bit why they chose the historical figures they did.  Those are pretty minor quibbles though, really.  Any time someone puts together a list like this, people are going to argue why one person and not another.  Personally, I would have chosen a number of other scientists before Darwin, for instance, not that I argue with the importance of knowing about him.  (Gelileo Galilei, pictured on the right, is the only other scientist currently included, though many others are on the "coming soon" list, such as Einstein, Copernicus, Edison, and so on.  I'd like to see people like Archimedes, Curie, and other less-studied people.)

Why is Quasimodo on there?  Again, I have no problem learning about him, but I wouldn't have put him on a top ten list.  I do think there is value in learning about literary figures, but I guess I'd rather that the author be the "historical person" instead of a character, and that you search for items relating to that author's more well-known works or characters.

Overall, though, we found this to be a fun site, and really enjoyed our time there.  My oldest insists that he didn't learn anything, yet yesterday he was telling me all about Sir Thomas Stamford Raffles, and seeing as my first exposure to him was in reading about Wiglington & Wenks, he clearly didn't learn about him from me.  And he now definitely knows where Singapore is, where before he only knew the general area.

The locations are fantastic.  They don't look real, exactly, yet they do... Here's the shot they have of the Great Wall: 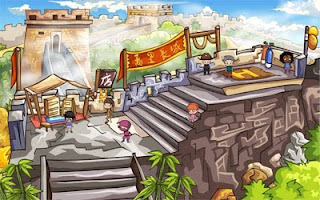 My recommendations?  Well, until they get the new safety stuff up and running, I wouldn't necessarily recommend having younger kids join.  And how to balance "screen time" versus real life is certainly an issue.  We don't get a television signal, we don't own any gaming systems besides our computers, and we really make an effort to get outside regularly.  So my kids playing in a virtual world that teaches them some geography and history along the way?  Works for me.

Also, since I know some of my readers are completely different from us in teaching things like mythology, I do want to point out that Neptune is one of the current historical people.

I cannot possibly afford to purchase subscriptions for each of my kids, but I am considering at some point continuing the "Team Brinkman" account.  Probably after the parental controls are improved, which they promise is in the works.


And you can check out what my fellow crewmates have to say about Wiglington and Wenks at:

Disclaimer:  As part of the TOS Homeschool Review Crew, I did receive a complimentary one month subscription to Wiglington and Wenks.  The fact that I received a complimentary product does not guarantee a favorable review.  It does guarantee a review. A fair review. But I am not going to praise something unless I think it deserves the praise.  If I don't like it, you'll hear that.  And hopefully with enough detail as to why so you can decide for yourself if what I hate about it makes it perfect for your family.  For more about my take on reviews, visit my blog post here.