Book Review: The Clouds Roll Away 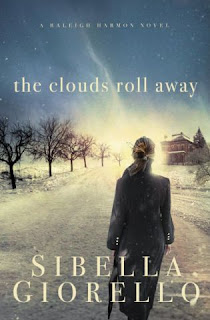 When the announcement came through about a blog tour for The Clouds Roll Away by Sibella Giorello, I got as far as the words "forensic geologist" before I scrolled back up to request to participate.  I enjoy a good mystery, Connor plans to go into some branch of forensics (he's leaning towards entomology), and William usually tells me he's considering a career in geology.  I had to have this one!

I'm so glad that I requested it, and am thrilled that I was picked for the tour.  So here is the publisher's description (and notice that I didn't get very far before requesting the book!):

Although her exemplary service in Seattle lifted her disciplinary transfer, Raleigh lands a hometown civil rights case riddled with problems that could get her sent away again. When she helps out a fellow cop, her life goes on the line, forcing her undercover in a sting operation. As Raleigh realizes the lines are crossing and double-crossing, her domestic life starts to unravel. Her mother's mental health cracks like ice, her closest friend grows cold, and her old boyfriend DeMott comes a-calling, hoping for more than chestnuts by an open fire.

While the city glows with Christmas lights and carols, Raleigh is forced to rely on her sharpest skills to stay alive, hoping for that one clear moment when everything makes sense and the clouds roll away.

I loved the book.  Loved it.  It was a bit tough to get into right off the bat, but it didn't take too many chapters before I was totally hooked.  My favorite aspects?
As far as what I didn't like, well, that list is shorter.  It was hard to get into initially, but I mentioned that already.  And Raleigh, of course, is described as beautiful, but at least that doesn't come up terribly often.

I absolutely will be looking for more from Sibella Giorello.

Sibella’s celebrating the release of The Clouds Roll Away by giving away a KINDLE prize pack worth over $150.00!

One Grand Prize winner will receive:
To enter simply click on one of the icons below! Then tell your friends! Winner will be announced January 3, 2011 on Sibella's blog: http://sibellagiorello.blogspot.com/.

Disclaimer:  I received this book through LitFuse Blog Tour.  No other compensation was received.  All opinions expressed in this review are my own.
Posted by Debra at 12/16/2010 07:47:00 AM

Thank you for your thoughtful review -- it made my day.