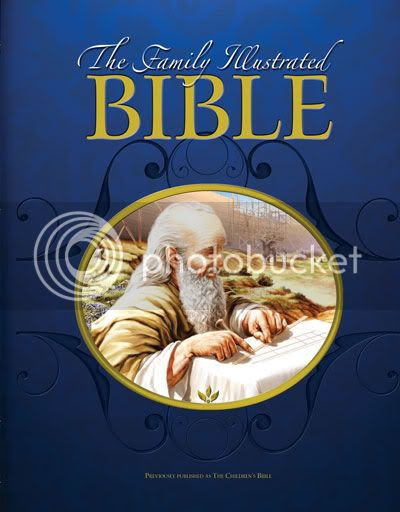 One thing I have done for a lot of years (at least a dozen now) is to read aloud through a Bible of some sort pretty consistently.  I have read through numerous children's Bible story-books, children's Bibles, we podcasted through the entire Bible, read a chronological Bible, etc.

I have found value in all of them.

So next on my list of resources is The Family Illustrated Bible by Sally Tagholm.  I've been reading through this myself, but haven't yet read to the kids.  However, I've seen enough to write up a review!

First, what is this book?  It is a big (8.5X11) thick (356 pages) hardcover book that is a lot like a children's Bible storybook... the bulk of the book is 1-3 page spreads, each doing one 'story' from the Bible.  In just looking through the table of contents, I am pleased.  Of course, a big chunk of the book is devoted to the big stories, but there are some of the more obscure ones too.  The stories are accompanied by drawings that do a really good job of being realistic, yet appealing to the younger set.

Interspersed with the stories, though, is what gets me really excited about using this particular book.  Periodically, there are pages with archaeological evidence of the time, or other fascinating "stuff" to go along with what we are reading.  Let me list a few examples:
And so on. Each of these sections contains a fair amount of explanatory text.

There are also big two page spreads that consist of a photograph (like one of the city of Jerusalem, or one of the Garden of Gethsemane).  These pages usually contain a box with a direct scripture quote (the page picturing Ephesus quotes Acts 19: 29-31) and a little box describing the photo (the photo of the Ishtar gate has explanatory text about when the gate was built and how it was discovered and reassembled).

I thought about taking some pictures, but this video shows what I'm talking about, at least the story pages and the "stuff" pages (no photo pages, unfortunately):

So now that I've raved about what I love, let me discuss some things I don't like.

Like most story Bibles, this doesn't directly quote scripture all the time.  So you end up with little things like statements that God was worried.  Overall, I didn't see anything really awful in those types of little comments, and we will discuss them as we go along.  I think this will be a great thing for my older kids especially.

In addition, on some of the "stuff" pages, some of the text is phrased, well, oddly.  "The Christians" is probably the most troublesome.  Under the "Gospel of Thomas" it says "Early Christians had many gospels alongside the four later included in the Bible.  The Gospel of Thomas, named after Jesus' disciple, taught that believers would be saved through self-knowledge, for 'the Kingdom of God is inside you.'"  The timeline (listing when the four gospels were written, but notably not saying anything about when the "Gospel of Thomas" is thought to have been written) doesn't mesh with most of the recent dating evidences I've seen.  And the section on Mithras, which I do think is a good thing to include, leaves me thinking that the author sees Mithras worship on the same level as Christianity.

Mostly, though, I think the addition of the photos and artifacts interspersed in this story Bible are going to be a really good thing.  So often, story Bibles leave me worried that all the fantastical stories of floods, giants, whales, etc. seem just that -- fantastic.  Having the "stuff" pages helps bring a lot of that back to reality.  This isn't just a story.  It happened.

Disclaimer:   I received this book for free from New Leaf Publishing Group.  No other compensation was received.  The fact that I received a complimentary product does not guarantee a favorable review.