Review and Giveaway: The Genesis Code 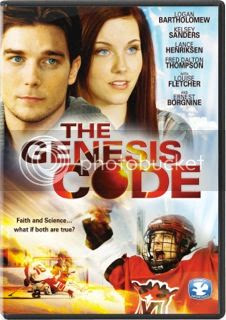 I am always up for a family-friendly movie.  And as my husband said in the opening scenes, "Oh, we needed another hockey movie!"

Not that The Genesis Code is really a hockey movie.  There is a fair amount of hockey right at the beginning of the movie, but hockey is far from the central focus.


Kerry Wells (Kelsey Sanders), a college journalist and committed Christian with an effervescent personality, has been assigned to do a story on Blake Truman (Logan Bartholomew) the college’s newest and very popular hockey superstar. As a relationship between them begins to develop Kerry finds that Blake, who hides behind a tough and independent façade, is actually struggling through a difficult personal crisis and that he bears the cross of a secret he has kept hidden for years. Blake rebuffs Kerry's suggestion that prayer might help ease his burden; he is convinced that modern science completely disproves the Bible, especially the opening verses of Genesis. Kerry — who is herself suddenly confronted with a challenge to her faith on another front — sets out to prove that science and Genesis are not in conflict and her quest leads to a startling revelation. Could it be that what science teaches us about creation and the Story as told in Genesis are both true!

Unlike most of the movies I've reviewed lately, this one did not hold the attention of my younger two (ages 6 and 8).  Thomas, my 11 year old, did stay attentive, but I think he is on the younger end of who is likely to find this appealing.

We enjoyed the storyline -- the personal crisis of Blake's and the faith challenge of Kerry's.  The "Genesis Code" part was interesting.  The physics nerds present Blake, some of his hockey pals, Kerry, and some other assorted persons with a pretty geek-speak hypothesis on reconciling the creation story of Genesis with modern science.

It was frustrating though, when we are having to pause the movie to talk about oh, say, the actual physics definition of motion, as opposed to the more casual use of the term.  I would have expected a physics geek who is presenting physics information to be a little more precise.

Anyway, the movie was enjoyable, and it is something we will definitely have to watch again when my teens are around.

And I have one to give away!


Disclosure of Material Connection: I received one or more of the products or services mentioned above for free in the hope that I would mention it on my blog. Regardless, I only recommend products or services I use personally and believe will be good for my readers. I am disclosing this in accordance with the Federal Trade Commission’s 16 CFR, Part 255: “Guides Concerning the Use of Endorsements and Testimonials in Advertising.”
Posted by Debra at 5/27/2012 09:40:00 AM

Being born in Minnesota, it's hard not to be a Hockey Fan.

i've been wanting to get this movie!

Being born in North Dakota, it is hard not to be a hockey fan too.

That's why we loved getting another hockey movie.

I'd like to get this one. My sports crazy son would probably enjoy. :-)

Okay, the trailer looks great! I've got to look up who the main actor is, I know I've seen him in something.

I want to win

I am a hockey fan. The movie sounds like it would be good.

Not hockey fans really, but we are always looking for family friendly movies since we do not watch tv! Thanks for the opportunity to win,, Debra!

Cannot call myself a hockey fan since I have never been to a game, but I am really wanting to go see one!

something frugal at yahoo dot com

I learned The Genesis Code is one of the best-selling Faith and Spirituality films on Amazon.com! I never heard of it before so this surprises me.

No hockey fans here, but I adore movies that use sports as a backdrop in them. And, I'm really curious to see this one after reading a few reviews.

I am always looking for family friendly movies that appeal to my boys! Thanks, Debra