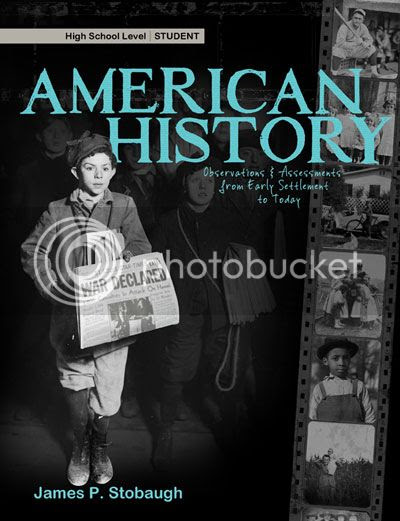 A while back, I posted a review of World History by James Stobaugh.  That set of books was the second year in a three-year high school history curriculum.

American History is the first year of that set.  It comes as a student book ($29.99, 384 page paperback) and a teacher book ($14.99, 160 page paperback).  The book is nonconsumable so you can use it with each of your children, a feature I really love.


Respected Christian educator, Dr. James Stobaugh, offers an entire year of high school American history curriculum in an easy to teach and comprehensive volume. American History: Observations & Assessments from Early Settlement to Today employs clear objectives and challenging assignments for the tenth grade student. From before the birth of our republic to the principles of liberty, American history trends, philosophies, and events are thoroughly explored. The following components are covered for the student:
Students will complete this course knowing the Christian influences that created a beacon of hope and opportunity that still draws millions to the United States of America.

The book, like others in the series, consists of 34 chapters, with daily lessons for days one to four, and a test/assessment for the fifth day.  For an idea as to the scope of this study:
With a total of 136 lessons (34 weeks times 4 lessons per week) this study obviously cannot cover everything that has happened in American history.  It seems to do a pretty good job, however, of hitting most of the important topics.

So, what did we think?

First off, the expected time to complete the lessons was a bit off.  Usually the reading aspect of the assignment could easily be accomplished in the 20 minute timeframe, but the assignments frequently require far more than a few minutes. Especially as sometimes you need to do additional research to truly answer the questions in the assignment.

That's a good thing though, because if you were to spend 30 minutes a day for 34 weeks, you are only talking 85 hours of work, which is simply not enough "quality time" in my opinion for a full high school credit.

I also really question the choices of where to focus time.  On the one hand, I think understanding the Civil War is critical in understanding a lot of American history, it seems a bit much to focus five weeks (nearly 15%) of the course to that topic, with a week on Antebellum Slavery, a week on causes of the war, a week on the war, and two weeks on reconstruction.  I think these chapters are fabulous, don't get me wrong.  But it is in stark contrast to the amount of time spent on other wars:
It isn't like I know what could change to make this better, but two days on World War II?  It just seems a tad bit rushed.

Since the study does not necessarily take enough time, though, it isn't like I can't throw in an additional biography here or there if I plan this as a full course.

One thing we love is the focus on some of the more "Christian" history of the US.  Things I wasn't taught in school.  So there is information on the First Great Awakening, and on the Second Great Awakening.  There are lessons that focus on people like Billy Sunday or Charles Fuller.

We also appreciate all the photos and charts.  A note though, everything is black and white.  I appreciate that this helps keep the costs down, and when there is something we think we need in color, it is a quick search to find an appropriate image online.

Overall, we are happy with this book.

You can watch this promo clip about the history series:

Disclaimer:   I received this book for free from New Leaf Publishing Group.  No other compensation was received.  The fact that I received a complimentary product does not guarantee a favorable review.
Posted by Debra at 10/04/2012 11:30:00 PM

Thanks for your honest thoughts and the review. I had seen this book and wondered about it. Hope you have a wonderful weekend! :O)

I just saw this course advertised in my Hearts at Home Sale. Nice review. I was wondering if you've ever seen Notgrass and could compare these two courses. You can e-mail me or Facebook me.