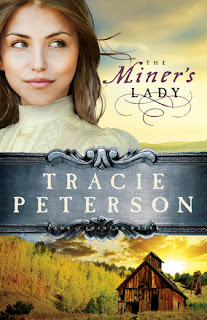 Awhile ago, I reviewed a book called The Icecutter's Daughter, by Tracie Peterson.  I really enjoyed that book, as I have this weakness for turn-of-the-century fiction that takes place in Minnesota or the Dakotas.  That book is part of a series, Land of Shining Water.

The latest book in that series is The Miner's Lady, which takes place in Ely, Minnesota.  Totally different setting than the first book, and not one I related to from family history.  This story centers on the Panetta and Calarco families, both Italian immigrant families.


When Chantel Panetta's younger sister claims to be in love with Orlando Calarco, Chantel knows there is no hope. The Panettas and Calarcos have been sworn enemies for decades, and young love cannot heal the deep wounds between the two iron-mining families. Yet, unable to resist Isabella's pleas, Chantel agrees to help her sister spend time with Orlando...only to have a run-in with Dante, Orlando's brother.

Chantel can't deny the attraction that flares when she's with Dante. But when a tragedy occurs at the mine, is there any hope that the hatred that has simmered between these two families might be resolved? Or will Chantel and Isabella's hope for love be buried amidst decades of misunderstanding?

I didn't get too far into the book before I started remembering a college friend whose name totally escapes me. He came to the U of M from Ely and he was very Italian.  Once I remembered him, well, the Dante Calarco in my head looked just like him.

I really don't know much about the history of Ely -- the Iron Range just isn't a part of the state that I've ever spent time in.  But... it still felt really historically "real" and the details were a lot of fun.

One main theme of the book was forgiveness, which just seems to be something I'm encountering everywhere lately.  Reconciliation was the subject of today's sermon in church, including the idea that we need to be forgiving everyone if we are wanting God to forgive us.  I'm butchering that, I'm afraid, as that doesn't sound quite right.  The idea that forgiveness isn't about who is right.

I missed The Quarryman's Bride, the second book in the series.  I'm going to find it, and I will watch for more titles in the Land of Shining Water series.

Disclosure:  Bethany House provided me with a complimentary copy of this book for review purposes.  No other compensation was received, and all opinions are my own.
Posted by Debra at 10/20/2013 03:18:00 PM