Review: The Answers Book for Kids, Volumes 5 and 6

We own the entire series of The Answers Book for Kids by Ken Ham & Bodie Hodge.  When I saw that Volumes 5 and 6 were coming up to review for Moms of Master Books, I was both excited and a little hesitant.  I mean, really, they've covered so much in the first four volumes, why are they continuing?

It turns out that I think these are the best books of the series so far (assuming more come out!) and I'm really happy to have them both.  Even my 16 year old sat down to read through them, and his first comment was "These are even better than the ones they wrote 'for teens'"

The description of the series in general, from the publisher:


Never short of questions, let these titles bring answers to children who may just want to know, or who may be struggling in their walk with Christ. Parents and teachers need not to be afraid of the tough questions with these solid apologetics titles in The Answers Book for Kids series. Too many children have grown up and left the Church because they are asked tough questions and no one seemed to have an answer. Now, here are those answers! 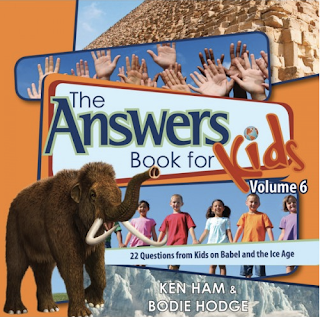 The Answers book for Kids Volume 6 is all about the Tower of Babel and the Ice Age.

The basic format in all of the books in this series is that you have a cute kid (or kids) on one side of a two-page spread, asking a question, with fun pictures on that 6"x6" page.  Very visually appealing.

The right side of the two-page spread has the answer to the question, usually.  One complaint I have is that the "answer" sometimes doesn't really answer the question.  Interesting information, but it doesn't always actually provide the answer.  My geeky kids notice that.  Sometimes (How big was the Tower of Babel?) the answer is obviously vague (bottom line on that one was, "the tower was probably about 7-8 stories and 300 feet (91 meters) high.") Those are fine, as they are answering the question.

And actually, paging back through this book, that isn't a problem in this title. So I guess I'll address an example down below. 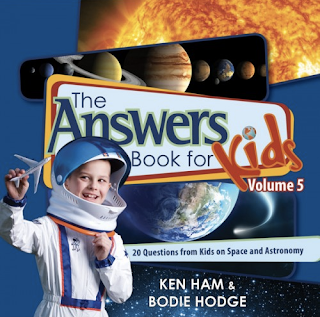 The Answers Book for Kids Volume 5 is all about space and astronomy.  This is hands-down my favorite book in the series.  Easily.

Volume 5 has the same basic format I described above.  Let me start with an example of not really answering the question though.  "Did Christians believe the earth was flat?" is one example.  And the answer just feels misleading.  They give a Bible verse (Isaiah 40:22) about the circle of the earth, which is great.  They talk about ancient people believing in a round earth, including Christians.  They talk about Eratosthenes calculating the circumference of the earth.

The statement "Very few Christians ever believed that the earth was flat." does, I guess, answer the question, but everything in there is discussing Christianity in the 200s (Lactantius mixing flat earth concepts with Christianity).  The answer ends with a warning about taking information from outside of Scripture and combining it with Christianity.

All of that is good... but MY kids read through that and said, "When people challenge Christians about flat earth, they are really asking about Columbus and early explorers, not some obscure person from the early church."  I agree.  I would have been more impressed if the answer got at least a little bit into the ideas of sailing off the end of the earth, and our misconceptions about just what it was that scared the sailors about exploring so far from known seas.

The bigger problem was the question on the big bang.  One son summed up his response to that two-page spread with, "It boils down to 'the Bible says it didn't happen so it didn't happen' and I want a bit more than just that.  There are major problems with the Big Bang theory, so why not address at least something there?"

In re-reading that page, the book says, "The big bang has several scientific problems, too."  That's it.  My kids wanted more.

However, like I said above, this is seriously my favorite in the series.

Questions like "What is the purpose of stars?" get fabulous answers that are easy enough for kids to understand, yet are likely to make parents say, "Huh, I never thought of that aspect."  The question about black holes is the best explanation I think I've ever seen.

What are comets?  What would happen if a comet ran into an asteroid? Do meteors burn up and are they dangerous?  This book has fabulous questions and really great answers.  Even the answers that I think should have been a bit longer are really GOOD answers, they just need (in my opinion) a bit more.

I recommend this entire series highly.  Especially if you have kids in the 8-12 age range, but even for teens.

You can go see what other Moms of Master Books have to say about The Answers Book for Kids.

There is a Book and a Treat Facebook party coming up November 19 at 9 pm EDT, where you could win cool prizes including (I assume) these titles -- and discuss the books too.

Disclaimer:   I received this books for free from New Leaf Publishing Group as part of the Moms of Master Books program.  No other compensation was received.  The fact that I received complimentary products does not guarantee a favorable review.