The last Bountiful Baskets of the year.  Oh, I am SO excited.  I love BB, really, I do.  But two weeks off?  Yeah, baby.

It was a good basket today.  Here is what one of my baskets looked like: 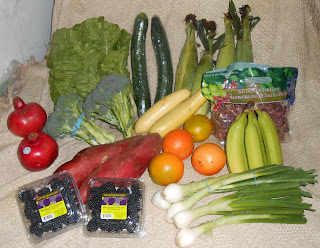 My two baskets contained:
As for how we'll use this, well: