Burning down the house

Thirty-three years ago, I awoke to some weird banging sounds.  After listening for awhile, I heard footsteps overhead and knew Dad was up.  A couple minutes later, he was pounding on my bedroom door and telling me to "Get the hell out!"

That wasn't language I ever remember hearing from him before, and I was a bit taken aback.  I sat there and tried to process what was going on, and realized the house was on fire.  I sat there, looking at my window, with "We're putting this window in as a fire escape" echoing through my memory.  The window well was filled with snow, though, and I rationalized that Dad just came down the stairs, so going up them seemed logical.

The steps were HOT on my feet.  Mom was at the top, and had tossed a coat to Mark, and she tossed one to me.  Then the smoke detector went off, which upset my 4-year-old brother.  I grabbed him, and told Mom that I had my brothers and we were going next door to call the fire department.  I really don't know if she heard me -- she was hollering down the stairs at Dad -- but with one brother on my hip, and the other one next to me, we headed out, barefoot, through the snow.

Mark's scoutmaster lived next door, and we rang the doorbell once (because we didn't want to wake everyone).  This would have been about 5:40 in the morning.  Mr. and Mrs. Feil peered out the window, and when they saw us, they sprung into action.  By the time Mr. Feil had opened the door, Mrs. Feil was on the phone with the operator, had given them her address, our names, and told the operator that we lived one house south of her.

My recollection of stepping through that door (onto a nice warm floor) was Mrs. Feil demanding "What?!" and I said "fire" which she repeated to the operator.  Mrs. Feil said, "The kids are here," to the operator, then asked me if my parents were out.  "I don't know," was all I could answer.  I don't remember exactly what she told the operator, but she communicated that "Glenn and Nadine are still inside" last we knew.

From downtown, and from the north Fargo station.   They kept getting closer, but it didn't see that way at all.  The records say they were there in 3 minutes. It sure seemed longer to me.

We watched from a window, at least Mark & I did.  We did see Mom & Dad come out (after they heard the sirens, and they stopped trying to call for help from the house).  And the fire department arrived, headed in... and then headed back out and ran around back.

We learned later that a fireman had fallen through the stairs.  You know, the stairs that were hot as I came up them?  And the ones that Dad still had to cover after my brothers & I had left?  Yeah, those stairs.

The most horrifying part, though, was later, when they pulled my baby brother's mattress out through the big windows in his room.  With a huge, smoking hole in the middle of it.

Apparently, that mattress started the rumor that a kid had died in the fire.

At some point, fortunately before "the boys next door" woke up, another neighbor brought over some clothes that might fit Mark & I.  I didn't have shoes, but at least I was no longer in skimpy purple pajamas that said, "Hug me" on the front, and "I cuddle" on the back.

Mark and I went to school that day, with me walking in shoes that were two sizes too small.  I had my gym shoes at school, so I was able to change when I got there.  And my health teacher used me as an example of the whole 'hierarchy of needs' thing... saying something about how I wasn't too concerned about self-actualization when I didn't know where I'd be sleeping that night.

The house was a total loss.  That night, we moved into a hotel, carrying everything we owned in about four shopping bags.  And almost all of that had been given to us that day (toothbrushes and such from Mrs. Sorenson) or purchased at J. C. Penney's using vouchers from the Red Cross.

The fireman was treated and released that morning, apparently suffering a broken arm.  We don't know that for sure. 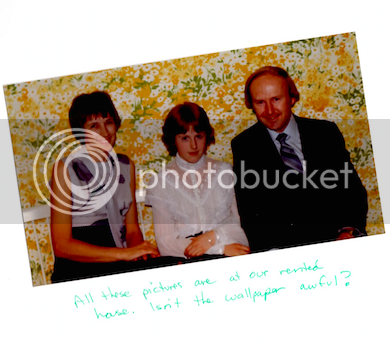 That was the start of a few life changing months for my family.  Mom's cancer diagnosis would come while we were living in temporary, rented housing.  We'd be back in our rebuilt house for the majority of her 3+ years of chemo.

My in-laws (the Feils mentioned above) talk about that awful night often. So grateful they could help in whatever way they could. Its one of the great things about growing up in a small(er) town, knowing/caring about your neighbors...sadly in the larger cities and towns many rarely know their neighbors let alone care. We were lucky, although we didn't always know it or appreciate it back then.

What a story! I'm so glad you are here to blog about it! I agree with one of the other comments by Janet. Yes, growing up in a small town can be a blessing that isn't always appreciated when you are younger.

Nicole @ Some Call It Natural said...

Wow. Thank you for sharing a bit of your heart. I'm sure those are memories that will never leave you!

Janet -- I was going to tag you on Facebook so you'd see this! I've always wondered a bit what the Feil's version of the story would be, and how different their perspective is.

They did a textbook perfect emergency call though. Every time I have to do any 911 training, I bring this time up (even though we didn't have 911 then!)

And yeah, Tim and Nicole, that is something I'll never forget, and we were really blessed to all get out of there. If we hadn't been awake before the smoke detectors went off, I'm just not sure what would have happened.

I my heart goes out to you whenever I hear this story. I am so happy everyone survived and thankful to have you in my life and family. Love You