By Your Side {a Tyndale House Blog Network review} 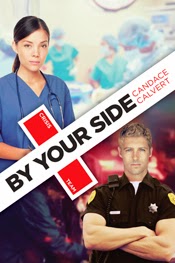 In the past, I've really enjoyed reading books by Candace Calvert.  She's a former ER Nurse, and she writes about what she knows -- medical dramas involving emergency rooms.

When I requested to review By Your Side, I expected it to be a great, action-packed romantic drama.  And it was.

I didn't expect to have my own mixed-up emotional responses to events unfolding in this fictional emergency room.

First, let's hear the description of the book from the publisher:


ER nurse Macy Wynn learned essential, gritty lessons in the California foster care system: land on your feet and trust no one. She’s finally located the fellow foster child she loves like a sister, but the girl’s in deep trouble. Macy’s determined to help, no matter what it takes. Her motto is to “make it happen” in any situation life throws at her—even when she butts heads with an idealistic cop.

Deputy Fletcher Holt believes in a higher plan, the fair outcome—and his ability to handle that by himself if necessary. Now he’s been yanked from Houston, his mother is battling cancer, and he’s attracted to a strong-willed nurse who could be the target of a brutal sniper.

When everything goes wrong, where do they put their trust?

Calvert definitely writes like she knows emergency rooms, not that I've ever worked in one.  But it just seems so realistic and authentic (though in that keep the action going drama sense of things too).

Especially the itty-bitty subplot that involves an adult child bringing Mom in to the ER, and things escalating during the drive to the hospital.  Spoiler:  the mom dies.

She dies in a handful of scenes that sounded incredibly similar to the scenes my dad had just described to me.  Sudden.  Unexpected.  Nobody got the chance to say good-bye.

It was eerie.  And very hard to read.  Because I wanted this mom to have a better outcome than my mom just had.

You could say I got a bit obsessive about this itty-bitty subplot.

Of course, the fact that Fletcher Holt (the main male character) is facing the probably death of his mother too.  She's got cancer, and that is why Fletcher is in Sacramento instead of home in Texas.  He's taken a job to be near Mom in what could be her final days.

Yes, that part of the plot got to me too.

For the rest of the world, though, those of you who aren't likely to even notice that this story includes a whole lot of loss of mothers and mother figures, this would probably be a totally different experience.

I love the characters, and the twists and turns in the plot did keep me guessing.

Had I read this book sometime other than a week and a half after suddenly losing my mother, I probably would have really enjoyed it.  As it was, I still did enjoy it, but it was difficult to read at times.

Disclaimer:   I received this book for free from Tyndale House Publishers.  No other compensation was received.  The fact that I received a complimentary product does not guarantee a favorable review.
Posted by Debra at 3/20/2015 10:23:00 PM