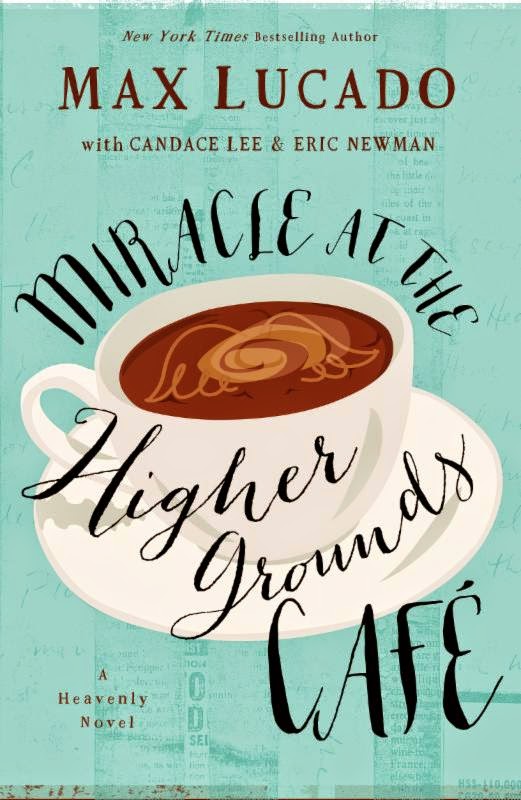 I've always really liked Max Lucado.  It seems that everyone does, so that doesn't make me unique.  When I heard he had a new fiction book coming out, and especially when I heard it had something to do with coffee, I definitely wanted in on that.

Miracle at the Higher Grounds Café was a wonderful book for me to read this past week.

Here's how the publisher describes the book:


Chelsea Chambers is on her own. After a public split from her NFL superstar husband, Chelsea takes a bold step out of the limelight and behind the counter of the Higher Grounds Café, an old-fashioned coffee shop in dire need of reinvention. But when her courage, expert planning, and out-of-this-world cupcakes fail to pay the bills, this newly single mom finds herself desperate for help. Better yet, a miracle.

Then a curious stranger lands at Chelsea's door, and with him, an even more curious string of events. Soon, customers are flocking to the Higher Grounds Café, and not just for the cupcakes and cappuccino. They've come for the internet connection to the divine. Now the café has become the go-to place for people in search of answers to life's biggest questions.

When a catastrophe strikes and her ex comes calling, Chelsea begins to wonder if the whole universe is conspiring against her quest to make it on her own. After a shocking discovery opens her eyes to the unseen world around her, Chelsea finds the courage to ask, and heaven answers in a most unexpected way.

This was a fun, fairly upbeat book.  Some tough stuff happens, but the tone overall is pretty optimistic and encouraging.  I have no idea where I stand on things like whether or not we have guardian angels, but I generally enjoy stories that involve them.

The story does require some suspension of disbelief, but it does make some really great points.  You know, like the big question asked over and over -- if you could ask God any one question, what would you ask?

I think that is the one area where I could relate to Chelsea.  I wouldn't necessarily come up with a question, but I sure would enjoy seeing what other people are asking and hearing.

You can see what others had to say at the Litfuse Blog Tour page!

In Max Lucado's new fiction release, Miracle at the Higher Grounds Cafe, he asks, If you could ask God anything, what would you ask—and how would he answer? When a catastrophe strikes and her ex comes calling, Chelsea begins to wonder if the whole universe is conspiring against her quest to make it on her own. After a shocking discovery opens her eyes to the unseen world around her, Chelsea finds the courage to ask, and heaven answers in a most unexpected way.

Join Max in celebrating the release of his new fiction book by entering his iPad giveaway and RSVPing to his Coffee with Max webcast!

One grand prize winner will receive:
Enter today by clicking the icon below. But hurry, the giveaway ends on March 23rd. Winner will be announced March 24th on the Litfuse blog. Then tune in later on the 24th for his Coffee with Max webcast. RSVP here!


Disclaimer:  I received this book through LitFuse Blog Tour.  No other compensation was received.  All opinions expressed in this review are my own.
Posted by Debra at 3/14/2015 03:58:00 PM