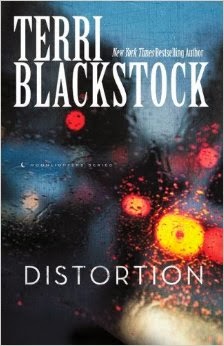 Terri Blackstock is joining my list of favorite authors, so I was thrilled to review her newest book, Distortion.  This title is the second in the Moonlighters Series, and was every bit as fabulous as the first in that series, Truth Stained Lies.  Probably better, actually.

In Truth Stained Lies, I was introduced a group of sisters, who end up "moonlighting" as investigators when their brother lands in jail, suspected of murdering his ex-wife (or estranged wife, I don't remember for sure at the moment).

Distortion picks up with another murdered spouse -- this time it is Juliet's husband.  And it appears that she and her kids are in danger too.  Here's what the publisher says about the story:


Juliet Cole's life has been dismantled by the murder of her husband. She doesn't know who---or what---to trust when everything she has believed to be true about her marriage has been a lie.

A husband's lies can have deadly consequences.

When Juliet Cole's husband of fifteen years is murdered before her eyes, she thinks it was a random shooting. Devastated and traumatized, she answers hours of questioning, then returns home to break the tragic news to her boys. But a threatening voicemail takes this from a random shooting to a planned, deliberate attack.

Juliet realizes that she and her children are in danger too, unless she meets the killers' demands. But as she and her sisters untangle the clues, her husband's dark secrets come to light. The more she learns, the more of her life is dismantled. Was her husband an innocent victim or a hardened criminal?

The sisters are again involved in investigating this crime, and it leads them to all kinds of places they didn't want to go.

I love a good mystery, and this fits the bill.  A good Christian mystery is even better, and this fits that bill too.  Imperfect people, many of whom are believers, mostly doing the best they can.  The situations can seem a little far-fetched at times, but not enough to be unbelievable.  And a lot of the twists and turns of the investigation are things that you can sort of see coming, but usually only a half-step ahead of the characters.  That's always nice.

Since this is the second book in a series, the big question I always have is, "Do I have to read #1 first?"  I do think this title mostly stands on its own, however there are at least a few things that wouldn't make a lot of sense without knowing the previous story.  Not enough to truly detract from the tale, but my recommendation would be to try to start with Truth Stained Lies.

One thing I really did like about this title, though, is that it is not a murder/romance.  Not that there isn't a bit of romance involved, but it comes across as part of life, not a central focus of the story.

Can't wait to see the next in this series, only hopefully it won't have to involve another murdered family member.

The book releases March 11th, and Terri will be kicking off the release with a fun Facebook Distortion party and giving away a Kindle Fire HDX. PLUS readers can pre-order the ebook for just $4.99 between now and 3/11 everywhere ebooks are sold.

One winner will receive:
Enter today by clicking one of the icons below. But hurry, the giveaway ends on March 11th. Winner will be announced at the Distortion Facebook Party on March 11th. Connect with Terri for a "suspenseful" book launch party with prizes, a book chat, and more.

Don't miss a moment of the fun; RSVP today by clicking JOIN on the event page. Tell your friends via FACEBOOK or TWITTER and increase your chances of winning. Hope to see you on the 11th!