Disclosure of Material Connection: I received this book free from Family Christian Stores through the Family Christian Blogger program, along with the certificate I am giving away. This post does contain affiliate links.  I was not required to write a positive review, and any affiliate relationship does not impact my opinions. The opinions I have expressed are my own. I am disclosing this in accordance with the Federal Trade Commission’s 16 CFR, Part 255: “Guides Concerning the Use of Endorsements and Testimonials in Advertising.”

You know those days?  The ones that start with the phone ringing at 7:30 in the morning?  I was awake, but not out of bed yet.  I answered, to discover that my husband had a flat tire on his way to work, and it was a day he simply couldn't not be there.

So I put on some clothes, made a cup of coffee, grabbed a book, and headed out.  He was about 40 minutes away, and I did beat the tow truck.  By about an hour.  <sigh>  I spent that time going over the books for church.

An uneventful tow truck ride into Pueblo followed, where I was regaled with tales about how much the driver's ex-wife hated his driving.  I seriously considered telling him that he probably should save those stories for his male customers.  But there were some seriously funny stories in there.

Then I had this view: 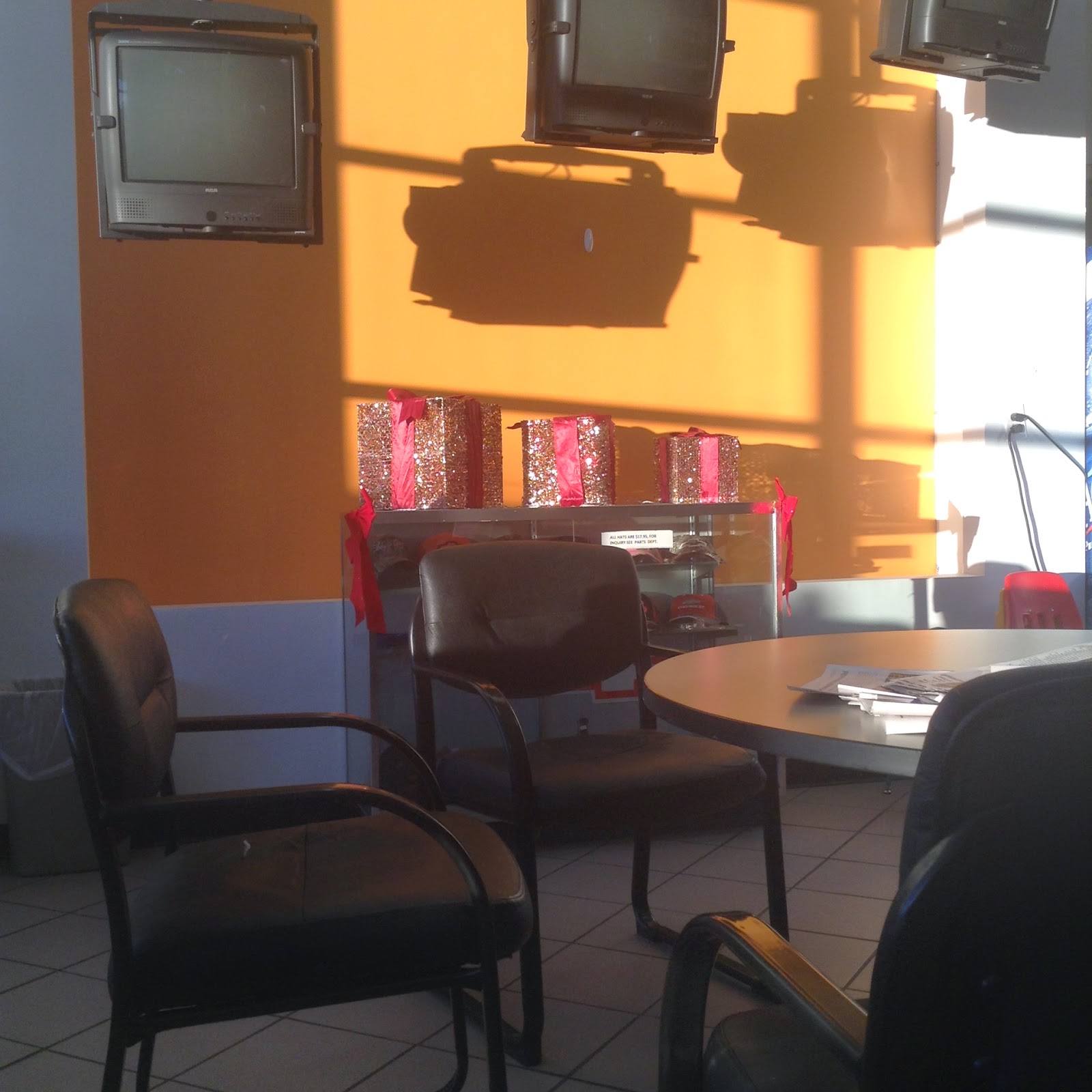 It was around 10:30 at that point.  After half an hour, I found out that they needed to order the tire, and it would be there between noon and 2:00.  I had nowhere to go, so I sat and waited.

And I spent the time reading Checkmate by Steven James.  It's the seventh book in a series.  I never pick up a series with anything past maybe the second book.  But for whatever reason, when I had the chance to review this for Family Christian, it intrigued me.

Let me quote the publisher's blurb:


In Checkmate, critically acclaimed novelist Steven James offers a climactic chapter in his bestselling series, the Bowers Files. When a clandestine FBI facility is attacked, Special Agent Patrick Bowers is drawn into the vicious, ruthless story that a killer from his past is bent on telling the world. Clues lead to long-forgotten secrets buried deep beneath Uptown Charlotte, North Carolina. Now Bowers is caught up in trying to stop one of the deadliest attacks ever planned on American soil. Smart, tense, and full of mind-bending twists and turns, Checkmate explodes onto the scene, bringing this cycle of the Bowers Files to an unforgettable conclusion.

I needed a good crime drama, so I went for it.  Then I stared at the book, wondering why I had requested it.

But look at that photo up above again.

I was very glad to have a seriously tense, twisty, who-in-the-world-did-it mystery on my hands.

You spend most of the book inside the mind of Agent Patrick Bowers, as he tries to figure out what is going on.  You also spend time in the mind of The Bard -- the bad guy in this case.  And occasionally, you get inside the heads of some other characters, like Patrick's step-daughter.  Some of the jumping around was a bit confusing at first, but I quickly learned who the characters were, and it became easier to shift from one point-of-view to another.

Knowing that I was reading Book #7 in a series, it was pretty easy to spot a number of places where there were references to previous stories in the series.  I am quite certain that I would have enjoyed this book more had I read #1-6, and I probably would have kept up with who was who a lot better.  However, it really didn't take long to have a good idea as to some of the history, and I didn't feel I was totally missing out by starting here.

I ended up quite absorbed in the story, I must say.  Sometimes I thought I knew what was going to happen next, but mostly I kept ending up surprised at how things were turning out.  It was a great read.

When I came up for air, I was still staring at the same empty chairs I posted above.  And it was 4:00.  I was thirsty, I was hungry, and I wasn't all that happy to have to return to my real life.  As it turns out, about a half hour later they finished with the car, I headed to a grocery store, and drove home.

But it was a fantastic book.

I have the opportunity to give away a $10 Family Christian Appreciation Certificate.  You could use it to purchase the book, or to get something else completely.

It's been a while since I've gotten any music...so I'd probably use it towards a new CD.

I would put it toward the Mandie DVD for my oldest daughter. She would love that and she has already read all 40+ of the books. -

I have a long list of books on my wish list, but I may get a gift for a friend instead.

PS -- I'm so sorry that you had such a long day away from home. I'm glad you had a good book to help pass the time.

I would let the girls pick out a new book or two, if I won.