We love online learning in my household, especially live classes.  It has been fun to try out a Family Class from FreedomProject Education.  They provide a wide variety of courses for all grade levels, and these courses are coming from a solidly Judeo-Christian point of view.  As  an accredited classical academy, they offer regular courses that have tests and projects and all that normal "school" stuff.  In addition,  they also offer Family Courses.

The course, Mother, Should I Trust the Government? was perfectly timed for us, as we've recently been finishing up high school government.  This course is only offered once a year, and we certainly enjoyed it.  You can check out all of their 2015 Family courses and see if one captures your interest. I know we'd love to take the How to Think class, but the kids are taking a real, live, in-person class on Mondays at the moment, so that doesn't work.

The Family Courses meet once a week for two hours, and there is little to no homework.  You can all sit and watch the course together, which is what we normally did.  I mirrored my laptop screen onto the television, so we could all see it.

Like many other online classes we've taken, everything happens through a "meeting" program, where you can see and hear the instructor, you have the ability to chat, the instructor can put slides or images or whatever up on the screen, and all of that makes the class very easy to follow.

Our course, Mother, Should I Trust the Government? is based on a book by that name, written by Jake Jacobs, Ph.D.  He is also who taught the course.

Reading the book was the only homework given during the course, which sounds like the usual case for the Family Courses.  The book is under 200 pages, and has a light almost-like-we're-chatting-over-dinner tone to it.  The eight chapters include:
That would be a fairly good outline of the course as well.

So on to the class itself.

Here's a screen shot I did one day, mostly because the kids loved the quote.  Dr. Jacobs is lecturing from the left corner, and you can see the attendance and chat box beneath him. 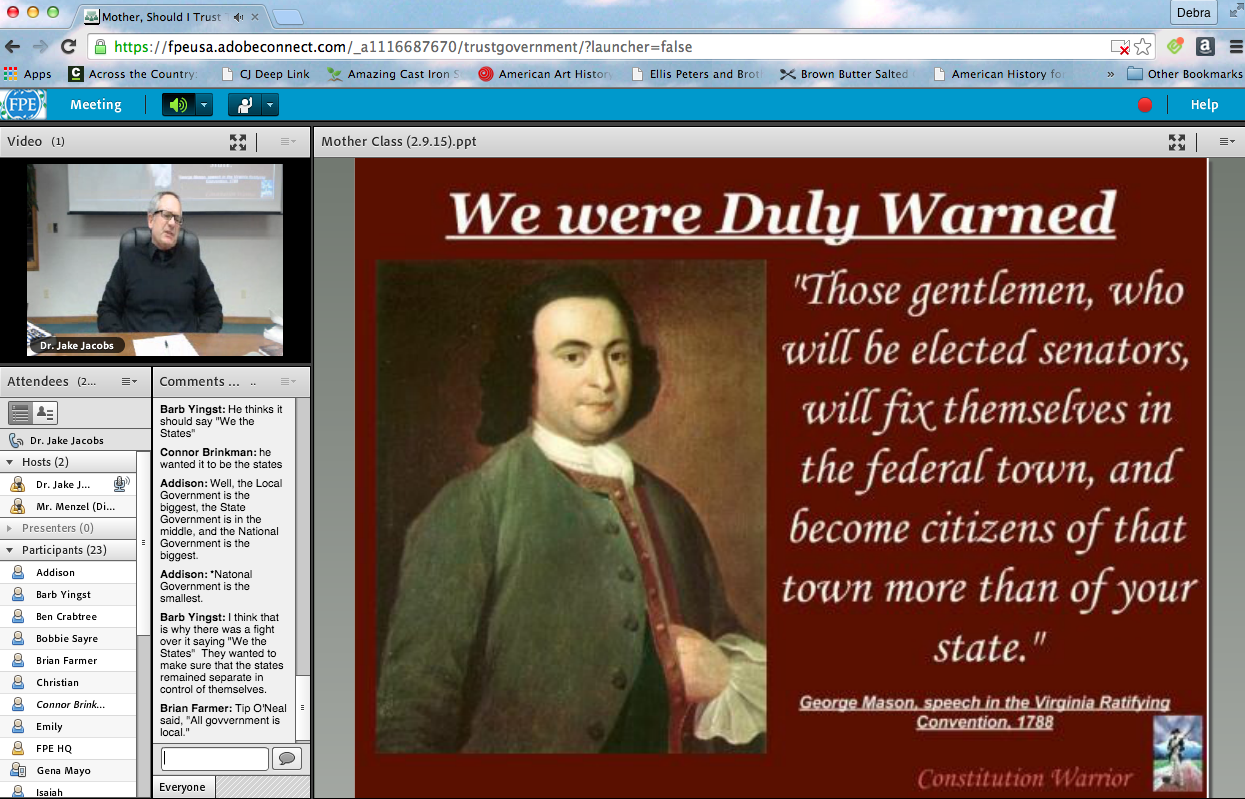 So in the interest of full disclosure here, life has been a bit crazy.  I planned to attend all of the classes, but life had other ideas.  There was a surprise trip to California, a lack of internet, and then Mom died.  All of that adds up to -- I was actually in the room during maybe three sessions.  Connor (17), William (16) and Thomas (14) attended a couple more than that, and they have watched recordings as well.

I am very grateful for the recordings.


So from here on out, the words are mostly Connor's, and he is the "I" involved.

I think it was a very enlightening course, and I certainly like the fact that he supplies so many additional resources, and varied resources too.  We checked a number of those out from the library, and we will be finding more.  I loved that it gave me an excuse to watch Mr. Smith Goes to Washington (again) and Amazing Grace (again).  "But Mom, it's for school!"

It was especially nice to have more information on the period right after the Revolutionary War and the Constitution.  Pretty much every government or history course I've taken jumps from Washington became president and stepped down like Cincinnatus, and then jumps forward a couple of decades to the Louisiana Purchase or something.  Learning what Adams and Jefferson did in their presidencies, and Madison too, was mostly new information.

It seemed to me that he did a good job of not making people seem bigger than life or like the devil incarnate.  He covers the good and the bad.  The discussion is also really accessible for anyone, I think.  He's not throwing around obscure terms and academic jargon, he's using real language or defining terms as he goes.  That was one concern I had with this course was that it would be too intellectual and not accessible to normal people.  He kept it light and easy to follow.

Due to the political nature of this whole subject, I'd worry about him superimposing his political viewpoints upon those of the founding fathers.  I suppose he did a little bit, as we certainly all have our biases, but he clearly explained the opinions of people he agreed with and those he disagreed with.


I do think he relied a bit too much on us having a grasp of Wisconsin politics in his examples, but since he lives there, I suppose that is only natural.

The live courses were great.  Mom kept telling me to tone it down, but it was fun to be interacting on the discussions that Dr. Jacobs would get started, and it was interesting to see how everyone else responded.

The recorded sessions have been good too, especially as we simply could not have made some of those sessions.  It was frustrating to not be able to answer questions or comment when watching the recordings, but it was also really nice to not watch the "small talk" that happens at the beginning.

Overall, this was a great course, and I'd enjoy taking another class from Dr. Jacobs.


There were thirty Crew families taking this class, so definitely go look at some of the other reviews!

Hi Debra, Great review. I was really impressed with Conner's writing. I wish we could have taken the course. I think it would have been great for my oldest. I'm curious about what U.S. government course your boys took. We are looking for a good one.