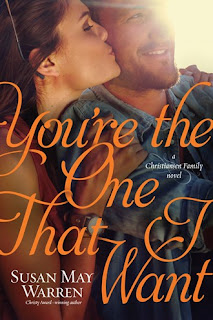 This is a very sad day.  Very.

I finished the last book in the Christiansen Family Novel series by Susan May Warren. You're the One That I Want is a perfect last book in this series, but that doesn't mean I have to be happy about seeing the series come to an end.

Every time I review one of Susie's Deep Haven books -- books that are set in the fictional town of Deep Haven, Minnesota -- I talk about how well she writes Minnesota.  Reading this series is like catching up with old friends.

This series has focused, one sibling at a time, on the Christiansen family.  Over the course of the previous five books, Owen has been set up as a pretty messed up young man.  He took off a couple of books back, and hasn't let anyone know what he is doing or if he is okay.

My favorite characters are still Ingrid and John, the parents of the sibling 'stars' of the series.  But I found myself, for the first time in this series, liking Owen as well.


Let's see how the publisher describes it:


Owen Christiansen has been in a downward spiral since an injury ended his NHL career. But a job on an Alaskan crabbing boat offers a fresh start . . . maybe even a shot at romance with Elise “Scotty” McFlynn, the captain’s daughter.

Used to being one of the guys, to never relying on anyone, Scotty doesn’t believe in happily ever after—especially with someone like Owen. Her instinct is confirmed when Casper Christiansen arrives to drag his prodigal brother home, bringing with him a truckload of family drama—and even worse, the news that Casper is wanted for questioning in connection to a crime back in Minnesota.

But Owen is more than the sum of his mistakes, a truth both he and Scotty discover when she escorts both brothers to Deep Haven as part of her new job on the Anchorage police force. Thrust into an unfamiliar world of family, faith, and fresh starts, Scotty begins to see potential for a happy ending . . . if she’s brave enough to embrace it.

I highly recommend this series, but I do not recommend starting with this book.  I'm sure it does stand alone, however there is just too much backstory that you'd be missing.  Start with Take a Chance on Me, which I have to confess, is my least favorite in this series.  But it sets it all up.

A major theme in this book relates to the prodigal-ness of Owen and whether or not he can accept the totally undeserved grace offered by God and offered by his family.  But it isn't just Owen facing some of these issues, it is something they -- we, really -- all need to process.

Disclaimer:   I received this book for free from Tyndale House Publishers.  No other compensation was received.  The fact that I received a complimentary product does not guarantee a favorable review.
Posted by Debra at 3/17/2016 08:00:00 AM