Why aren't you in school?

I know full well that I'm not the only homeschool mama who ends up with that clenched up, here-we-go-again, why today?? feeling when I total stranger asks her kids, "Why aren't you in school?"

This isn't something I've experienced much lately, but that question brought back so many memories of being bombarded with oh-so-many opinions that I really didn't ask for about how badly I was screwing up my kids by not letting them socialize.

You know those moments, where you stand there thinking that you probably shouldn't say what you are thinking, right?  In the midst of a tirade, I usually want to say something snarky.  Like commenting on how public school obviously did wonders for YOUR ability to pleasantly interact with complete strangers in the grocery store.

So, to back up.  This week, the little two had eye appointments.  Trina desperately wants glasses, and the doctor did write her a prescription.  I'm thinking that we are not going to fill that though.  We'll be trying some other things.  But she did find frames she really, really wants. 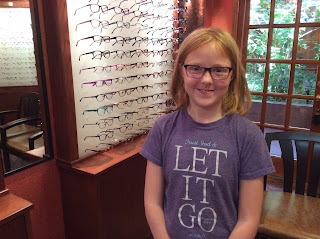 Then we headed to Sam's.  The plan is to cook and freeze 20 meals for an upcoming Crew review, and we needed to do some shopping.  Pleasant trip, kids were hugely helpful.  We're having a very nice day.  We get up front to check out, and all the lines are 4-5 people long, except one.  We head for it, and right as we get there, a cute little old man (I'm guessing early 80s) walks over behind us.  With a book.  I immediately told him he had to get in front of us in line, and he starts chattering away with me, and with the kids.

Sweet guy.  He tells about how much he misses kids, how he drove a school bus for years, and regales us with stories about the kids on the bus.  We're inching up in line, and an older (mid 70s) lady gets in line behind us.  My kids offer to put her items up on the belt for her, and chit chat with her for a few minutes.

I'm still talking with the Book Guy.  The kids come back.  And then,

"Say, why aren't you two in school today?"

My first thought is, "This was such a pleasant time, and I. Just. Can't."

The kids put on that same look I feel myself putting on.  You know, smile and pretend this isn't a question you dread discussing with strangers.  One of them says, "We're homeschooled." And I am saying, "They had eye appointments today, so we're taking the day off."

And Book Guy says, "Really?  You homeschool?"  And he proceeds to go on for two-three minutes about how he thinks everyone should homeschool these days instead of subjecting their children to godless evolution rammed down their throats, and that schools today aren't what they used to be.

I breathe a sigh of relief.  And the checkout person asks Book Guy for his Sam's card.

While I didn't agree with him, the encounter didn't leave me feeling attacked.  And I wondered a bit about my response to the question, and my assumption that we were going to be criticized.  It has been awhile since random strangers have attacked my education choices out of the blue, but I still have flashbacks to some of the worst of those conversations.

Some days, I definitely need the reminder that not everyone who asks, "Why aren't you in school?" is going to lecture me.

Email ThisBlogThis!Share to TwitterShare to FacebookShare to Pinterest
Labels: homeschool

I have no idea why but I'm picturing George Burns as you describe Book Guy. I don't remember the last the time anybody has asked that question.