I had no idea how much we needed this course.  It never occurred to me to go searching for an aviation homeschool program at all.  Now that we've been using it, though, it has been fantastic for everyone.

Doctor Aviation to the rescue, when I didn't even know I needed rescuing.  We've been using our subscription with the entire family, and it has been great on multiple levels.
I'll talk about all three a bit more below.  But first, what is Doctor Aviation?

When you subscribe to Doctor Aviation, the meat of the program is fifteen video lessons.  Each lesson also includes guided notes, and a pdf of suggestions to learn more.  You can get tests as well, which are great if you are using this for high school.  I chose to do my own testing.

Each lesson consists of three sections.  The first is the most science-y portion, as you learn about the physics behind flight and other technical aspects.  The second section is a biography of someone important in the aviation world.  The third section is either about an aviation event or it is about a specific aircraft.

The videos are roughly an hour in total, with clear breaks between the three sections.  That brings me to my one and only complaint about this program -- I wish the weekly sessions were actually split into three separate chapters (with chapter markers) or even separate videos, so that you could easily watch one part at a time.  We lived with it, but that would make a big difference in ease of use.

For high school, a 1/2 credit course is often defined as requiring 60+ hours of work.  To get there, we needed to do around four hours of work per lesson.  The video was one of those hours, and discussion usually added at least another half hour.  Each of the pdf files easily provides multiple ways to get another couple of hours of work in.

Depending on which options you choose, you could easily use this course in multiple subjects.  We chose science, so we tended to do things like read the scientist biographies, watch the science of flight youtube videos, and do some of the hands-on science activities.  We have been doing each lesson over two weeks, but to get through in six months, we'll have to do a few over one week.

You could very easily make this aviation history, by focusing more on all of the biographies and doing more with the events.  William would have preferred that, but he has plenty of history credits.

You could make this a general elective too, of course.

Trina is working on her Aviation Badge at the Explorer Level (4th-6th grade), and this course is fantastic for really doing that.  This course directly covers a lot of the badge requirements, and most of the remaining ones are easy to add in.

Assuming she hadn't earned this badge before, she would have to (these requirements are simplified for this blog post, there is more detail in the actual badge book):
She also has to do two additional things, among the choices are: 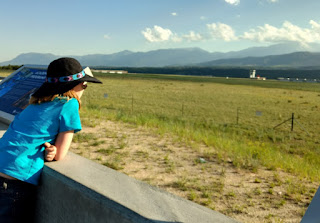 Basically, in order for her to earn this badge, we need to be intentional about doing things as we hit them in the course, and we need to spend some time making paper airplanes.

I saved the best for last.

Starting this course, though, has really made him think.  He is recognizing that he could actually fly.  And that he could start doing that soon.  We are only 1/3 of the way through the course, and he has started investigating Civil Air Patrol.  He checked out every single book the library had on making paper airplanes (so I put him in charge of Trina's paper airplane badge requirement above!)

This course is making him think about what he can do with the rest of his life.

Will he be a pilot?  I have no idea.  He's still only 13, so he has lots of time to change his mind.  But right now, it is giving him a direction, and it is spurring him on to understand why he might actually need to learn science and math.

I call that a win.

Go and see what other members of the Crew had to say about this fantastic program.  I think it is wonderful, and am grateful for the opportunity to use it.

Xav really wants to be a missionary pilot. He's talked about it half his short life! He has a couple more years before CAP, though. :)

A couple of my boys did Civil Air Patrol. Neat program!

I wish I'd heard of this when my Eli was homeschooling. This sounds PERFECT for him!

We just took a trip to our local aerospace museum, while they had the DaVinci Experience exhibit. There's also an air museum on my son's Air Force base, about 2 hours from us, which we need to go visit one of these days. That course would be the perfect excuse for it, lol.