We have been reading the Christian Heroes: Then & Now series for a lot of years in our home. Janet & Geoff Benge write these biographies in a compelling way for young (and not-so-young) readers, and we love going through them. Corrie ten Boom: Keeper of the Angels’ Den is our most recent title, and I was thrilled to receive the Study Guide for this review.

William, my high school senior, has been studying 20th Century History this year, and one of the books he was assigned to read was The Hiding Place by Corrie ten Boom. It was during that time that this review for YWAM Publishing  came up. There are so many great people that we could study, but I really wanted to have everyone involved in learning about Corrie.

We own this book as both a paperback and an audiobook, so we chose to listen to it. Initially, we would listen to one chapter a day and answer the questions in the study guide. It didn’t take too long before everyone was begging for “one more chapter, Mom” and I was happy to comply.

Each chapter has six questions. The first four are fairly straightforward and we didn’t always use all of them. One is a vocabulary question, one is a fact-based question, and two are basic reading comprehension. The final two questions are what we usually focused on. Chapter Three, for instance, had two questions that really generated incredible conversation:

5. Corrie told the Gestapo officer collecting the radios that they had only one at the Beje. Do you think she was justified in telling a lie? Why or why not?
6. Betsie prayed for the German bomber pilots. Do you think your own reaction would have been more similar to Betsie’s or Corrie’s? Use examples from your own life to support your answer.

The study guide contains more than just questions for each chapter. We also discussed some of the questions they suggest for essays, though I did not assign any writing. There are creative writing suggestions, project suggestions, and more. There are a bunch of mapping activities, and many great suggestions for further research. If I wasn’t trying to wrap up the year with my soon-to-be-graduate, we would undoubtedly have dug into some more of those activities. 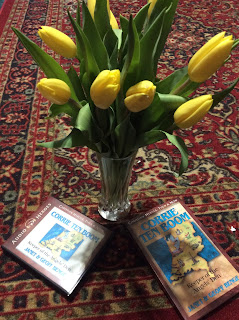 One thing we did was to find other resources suggested in the guide. We watched The Hiding Place and Return to the Hiding Place, and we watched a travel documentary about Holland. We read Number the Stars and are about to start When Hitler Stole Pink Rabbit. We also bought tulips. Even my boys appreciated those.

Richard, my 14-year-old, commented to me this evening in the car about how much he enjoys the series. “They always give a lot of information, so you truly learn about the real people, but they keep the action going. These books are always paced so well, so you don’t lose interest.”

One thing I have always noted is that they do a very good job of ending chapters so that you are eager to find out what happens next.

Trina, age 12, told me that Corrie ten Boom is now her second favorite Heroes book. Her favorite is Lilian Trasher. Richard was quick to point out that his favorite is Nate Saint.

What I truly love about these stories is that they give us a shared experience in learning about some really amazing people. We learn about challenges that Corrie faced, we learn about the amazing people in her life (her father and sister especially) and how they influenced who she became. We see her struggles and we see how God works through her.

It is pretty incredible just how often we end up in situations where we can say something like, “Isn’t this just like what happened to Ida Scudder?” and we all are reminded of how she would go ahead and start acting on what God had told her to do and to let the money or other details work themselves out.

We’ve loved these books so much that we subscribed to YWAM’s book of the month club. Every month, we get an audiobook from their Christian Heroes series, and also an audiobook from the Heroes of History series. Just listening to the book is great, but the study guide does add a lot to the experience.

The other thing I love about these books is that I end up learning about people I know – and lots of people I had never heard of. I wasn’t brought up learning about missionaries. And all of my kids (ages 12 to 21) enjoy listening.

Check out what Crew Members had to say about the books they reviewed. CS Lewis and Billy Graham were the two most common and are ones that I am wanting to do soon.

I love your blog! And I also love Corrie ten Boom! This is fantastic, I love for my kiddos to have real 'heroes' that they can look up too and aspire to be like!