I don't recall when or how I first heard about Mathletics, but the site intrigued me.  I wanted to try it out for my kids, but never had a good chance to do so.  Until the TOS Review Crew.

As part of the Crew, all five of my children ended up with 45 days of access to the Mathletics website.  We love it, and hope to find a way to subscribe at least some of the kids early in 2010.

There are a few different aspects to this online math service.  Different parts appealed to different kids. 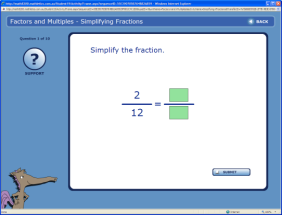 1) They have a grade-based "curriculum" that the kids can work through, doing lessons (with step by step animated help available) and taking tests.  We worked with grades K, 1, 3, 5, 7 and 8.  The lessons seemed a little on the easy side, but I do have kids who are good at math, so my perspective may be a bit off.  Regardless, the lessons cover great math concepts and seem fairly thorough.  For US students, there are levels available for K-8.  Other countries (Canada, UK, Australia, etc.) have high school levels available also. 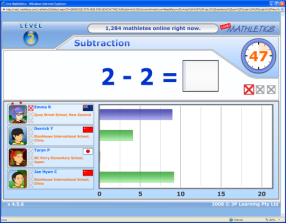 2) There is a section where the kids can compete against other kids around the world, live.  This is on basic math facts, and it is a race to get the most correct answers, with fewer than three errors.  My kids competed against many students in the US, but also quite a few from Australia, New Zealand, the UK, and Canada.  And one or two from Africa.  My older guys particularly loved doing this, and I heard about any new country flags that popped up.

3) There are games, which you unlock by making progress in the curriculum part.  My younger two loved this.  Some for the younger ages had to do with creating patterns, others with simple counting, or comparisons of different shapes and colors.  In the 5th grade section, one involved a BINGO game using Roman numerals.  Games are available for Grades K-6.

4) There are pdf workbooks available for many of the grade levels.  Not all grades at this point, but many of them.  We haven't used these at all, but I did look four or five of them over, and I liked what I saw.

5) There is a section called Rainforest Maths which also has games and activities broken down by grade levels, K-6.  My younger two liked doing these.

6) There are some other options within the parent account for some video demonstrations and other such stuff.

7) Many of the above activities will earn the kids coins, which can be used in the store to purchase stuff for their avatars.  All of my kids wanted to do at least something with this... to be able to get "the" right background, glasses, or hat.  My older boys were pretty uninterested in it after they did a minimal amount of upgrading.  My three younger ones do the math part so they can go shopping.  The shopping part does involve math though too.  Amazing how my 5 year old can manage to do subtraction of "big" numbers when he is trying to figure out how many more coins he needs in order to purchase the cool space background.  The 3rd grader even starts doing some simple division (how many 10 token activities do I need to do in order to have enough to get the ______?)

Connor, age 12, doing algebra and geometry right now.  He started in the 7th grade program of Mathletics, found that incredibly easy, and moved to the 8th grade materials.  It is mostly review, but it is pretty quick and painless.  He loves the live competition, which is great as he can stand a bit more automaticity with his math facts.

William, age 11, is working at the 5th grade level.  He's found the math to be about perfect, but he really doesn't want to do it.  He wants to do the live competition, and it is like pulling teeth to get him to do some of the curriculum.  I think this is a great program for him though.  The reading required (this is my severely dyslexic one) isn't excessive.

Thomas, age 9, is working at the 3rd grade level. He likes basically everything.  He is collecting hats for his avatar, and backgrounds.  The math is going great, he likes the competition, and he plays some of the games.  The math is a great level for him -- easy enough that he doesn't get frustrated, hard enough to at least make him think.

Richard, age 5, worked through the kindergarten level in a few days, and is enjoying the 1st grade materials.  He loves spending money on stuff for his avatar.  He's pretty so-so about the live competition.

Trina, age 3, was terribly jealous that she wasn't doing this too.  When I let her try out some of the games, she did great.  So I ended up getting her a subscription too.  She adores buying things for her avatar.  She loves the games.  She's doing great with the curriculum part.  She insists on doing Rainforest Maths.  However, I don't plan to buy her a subscription.  Maybe when she is actually in kindergarten, we'll see.

Mom, age older than dirt, particularly loves the weekly reports that are emailed to me (you do have to opt-in to this, it is not automatic).  Very good detail, and I really get a sense for what they have worked on.  I like the mix of drill and games.  And I can access a fair amount of information about where they are through my parent account too.

A few things I don't necessarily like, though, too.  First is that there isn't an option to have the text of the math problems read to the child.  So that means kids who are not fluent readers do need help, at least some of the time.  It's an issue I run into for William all of the time.  He's got a great head for math and science, but it's tough to find things he can do that aren't teacher-intensive due to his reading lag.  Though I do have to say that he has done fairly well with the reading here.  But I think that is why he wants to do the competition and not the lessons.

Another minor gripe is that there is a limit as to how many times you can adjust the "grade level" of the curriculum.  I am assuming that limit is per year, in which case it is reasonable.  But it makes me nervous (or would if I had a one-year subscription) about choosing the right grade level.   Connor tends to move through math fairly quickly, and if I start him too low (very easy to do) and move him up, then up again, all in trying to get him placed right in the first place, suddenly, I've used a pretty good chunk of my allotment.  Given that he can then probably move through an entire grade in about two months, move again in another two months... well, I could easily run out of the ability to move him up.

Recommendation time:  I think this is a great set-up, with multiple ways of presenting the math to hopefully appeal to most kids.  If you have kids who only want to play games or do the live competition part, you can assign aspects of the curriculum to them so they have to do that first.  The price can be a bit steep, particularly for a larger family.  A one year subscription runs $59 per child, though right now (and at least through January), if you input 9 as the human calculator's favorite number, you get roughly $9 knocked off that.

I think this program is strongest at the upper elementary level, roughly 3rd-7th grades.  I don't think I will purchase a subscription for Connor (high school level), as there just isn't quite enough for him. Nor will I purchase one for Trina (though she'd be roughly 4, and is doing kindergarten math) as there isn't as much content and it requires too much hand-holding from me.

My 5th and 3rd graders, though, I am going to look very seriously at getting subscribed in 2010.  And I'll consider my kindergartner as well, though it would probably make sense to wait another year.

And you can check out what my fellow crewmates have to say about Mathletics at:


Disclaimer:  As part of the TOS Homeschool Review Crew, I did receive five 45 day subscriptions to Mathletics for free from 3P Learning.  The fact that I received a complimentary product does not guarantee a favorable review.  It does guarantee a review. A fair review. But I am not going to praise something unless I think it deserves the praise.  If I don't like it, you'll hear that.  And hopefully with enough detail as to why so you can decide for yourself if what I hate about it makes it perfect for your family.  For more about my take on reviews, visit my blog post here.