Book Review: Passport to the World

I recently had the chance to review a pretty wonderful book -- Passport to the World by Craig Froman.  I love books that teach geography, and especially ones that do it in an engaging way.  Below, you can see Trina pulling out the passport: 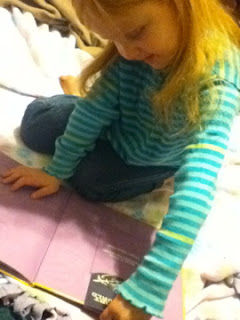 There are passport stamp stickers in the back of the book, so once you have visited a country, you get to 'stamp' your passport.  My kids are very motivated by stickers at the moment, so that makes them even more interested in working through this book.

This is set up as an "alphabet" book, meaning there is one country per letter.  There is a bit of a twist on that though.  It isn't "G is for Germany," but rather "G is for German."  Which means you don't find China under C, but under M (for Mandarin).

I love this organization!  And I really like that this allows a country like the United States to be included in a not quite expected way (under C for Cherokee!)  And I love that the book includes English ("a language spoken in Australia") as well.

There are a number of pages besides the alphabet/language ones.  One is a "how to use" this page that basically shows how the pages are organized.  At the front, there is also a map that shows the included countries colored in, and lists the letter, language, page number and country name.  Just from looking at that, you can see how comprehensive this book is... the big countries (Russia, China, Australia, United States, Mexico) are colored in.  There are countries colored on all six inhabited continents.  South America, unfortunately, only has Bolivia.  There are multiple countries for all the other continents.

At the end of the book, there is a facts at a glance spread, two pages with all the country flags and outline maps of each country, and a page titled "Breaking the Language Barrier" that lists a bunch of fantastic organizations such as UNICEF, Compassion International, and the Children's Christian Hunger Network.

The bulk of the book, though, is the two-page spreads for each country.  Bright, colorful, and with a whole lot of information packed in.  Here is Trina looking at the Cherokee - United States page (the pizza got her attention!): 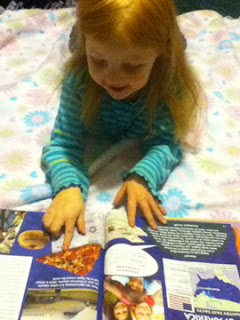 And Trina and Richard on the Japanese - Japan page (both interested in the rice... did I mention that FOOD is a big attention-grabber in my house?): 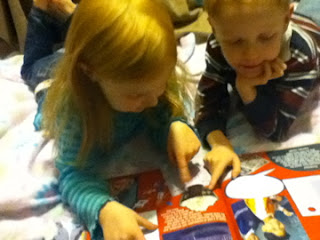 So besides food, each page includes some basic facts about the country; a list (with phonetic pronunciation guides) of how to say hello, goodbye, thank you and peace; a blurb that combines facts with the words in that language; money (also something the kids went to immediately); pictures of someone in traditional dress and someone in contemporary dress; a picture of something of geographical interest; and a fabulous "Did You Know?" section with great little tidbits of information.  There is also a picture of the passport stamp, along with a proverb of that country.  These match the stickers that the child can put into their passport.

Here's Trina reading the Did You Know? section.  She read "did" and gave up on "you" -- asking me to read it at that point. 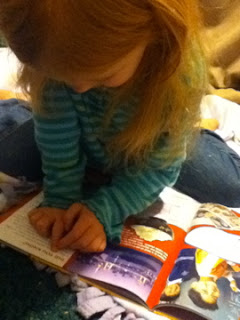 Richard snuggled up on the couch to look the book over this morning as I was trying to finish my review.  He was busy reading through the Dutch - Netherlands page this morning. 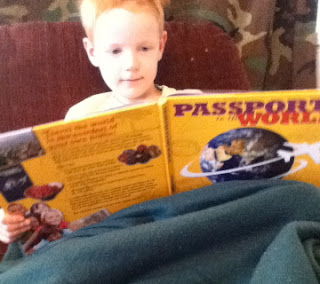 One thing I love about this book is that it includes countries I don't expect.  Like Lithuania.  I have to tell you, growing up, every year in elementary school, we would have to "research" our heritage and come to class and tell something about the countries our ancestors came from.  The presentations were pretty monotonous... 1/3 of the class was 100% German, 1/3 of the class was 100% Norwegian, and about 90% of the class was a combination of German and Norwegian.  Nobody had to list more than two countries.  Except me.  Not only did I have to list lots of countries, but they included ones that the whole class laughed at and said didn't exist.  Like Lithuania and Wales.  And BOTH are in this book.


This is a new favorite for me.  We will be using it often, even with the big kids.

I'll end with their "trailer" video:

Disclaimer:   I received this book for free from New Leaf Publishing Group.  No other compensation was received.  The fact that I received a complimentary product does not guarantee a favorable review.
Posted by Debra at 1/04/2011 09:20:00 AM

The Amazon website lists it for ages 9-12, which is probably right for a reading level. But I'd say 5-10 is ideal, and it is probably good at least a couple years older than that too. My 12 and 13 year olds weren't particularly interested in it... but they are willing to listen to a section or two.

I love the pictures of your kids reading the book! Thanks for including them all.

I had to check out the photo taking capabilities of my new Touch :)

I'm not terribly impressed, but the photos aren't awful either. Especially considering how bad the light was when I took them, both times.